Mixers can breathe a collective sigh of relief because the girls from Little Mix are back with their brand new album, Confetti. Their sixth studio outing in just nine years, Confetti places Jade, Perrie, Leigh-Anne, Jesy back at the top of the pop game and solidifies them as one of the world’s biggest and most consistent girl groups.

Their first collection of songs since they departed Simon Cowell’s label Syco and signed with RCA UK, listeners are holding their breath to excitedly find out – will this new anticipated album be any better than their last, LM5?

Well, we think the newly independent gals outdid themselves with this one, delivering yet another ridiculously polished, infectious, delicious pop album. Here’s our review of Confetti songs ranked from worst to first…

Little Mix does really great ballads when given the right song (Secret Love Song, anyone?) but as much as we wanted this to be a tearjerker, it’s just a little bit boring and mopey on the whole. There are some good lyrics, but it just takes a bit too long to get going. Sorry, Mixers – something had to be last!

One of the album’s many urban-leaning tracks, Rendezvous is super 1990s/early 2000s with its Destiny’s Child/*NSYNC sound. It’s a cool track and we love the rap-like parts, but the chorus is a little anticlimactic for us. It starts off on one level and doesn’t really get to soar by the end of it, either.

Carrying on with the 90s pop spirit, this one definitely reminds us of It’s Gonna Be Me by *NSYNC. It’s a statement piece, and we love Leigh-Anne’s adlibs over the main melody towards the end, but we’re not dying to hit that repeat button either.

So many flavors on this album. In this one, they channel a little bit of Rihanna in the beginning and then some Katy Perry (in Rise) in the chorus. It’s also a little similar to Power, which was a single off the Glory Days album. I’m sure Mixers will appreciate this empowering anthem – it definitely makes us feel like a straight up boss.

When we first saw the title of this song we thought it would go something like Love Me Like You or something that at least sounded sweet, but nope – this is actually one of Little Mix’s darker tracks and has a real urban groove. A little bit more reminiscent of the girls’ earlier work, such as DNA, Sweet Melody is a strong track on this album.

Love the stomping sounds, love the sentimental lyrics, love the singable chorus. Breathe does a pretty good job of closing the album, and we appreciate that the girls get to flex their vocal abilities again here, as well as their more sensitive side. Breathe is definitely going on our playlist.

Man, a break up is never easy – especially when your lover moves on and is happy with someone else (“She in the same cute tee / That you bought me”). The girls capture that emotion really well in this bittersweet track. We have to say though, we wished the chorus wasn’t such a switch up from the verse. The first verse is so beautiful and delicate and the big drums of the chorus just throw us off a little.

Jesy’s vocals really shine on this one right from the get-go. Again, Happiness reminds us of an R&B track from the 90s, and hey – we’re here for the throwback! The beat is sick and we also love Perrie and Jade’s adlibs at the end of the song.

Carrying on with the urban theme from the previous track, Sweet Melody, this track opens with a DJ Mustard-esque beat and sees the girls being just straight up baddies. Definitely more R&B influenced than most of the album, Confetti is a headbanger of a power anthem. We live for it!

Whew, these girls are bringing the edginess and attitude! What we love about Little Mix is that they’re never afraid to cross genres and push the boundaries, and that’s what they’ve done with this song. Quirky lyrics, a whimsical melody line and anthemic-like choral vocals definitely make this a memorable entry on the list. Also (possibly) a message to their previous label? We love the girls being a little shady.

3. Nothing But My Feelings

Daaaamn, the girls are bringing out their swag on this track. It’s a little Cher Lloyd, a little Ariana Grande, but also very Little Mix. Jesy’s trademark cutesy vocals are gorgeous here, and we loved the harmonized chorus. Oh, and the song is also deceptively really sexy (“I’m laying here / In nothing about my feelings / Thinkin’ bout our shadows on the ceiling / Waiting for you”). Get it, girls!

Okay, who didn’t bop to Holiday when it came out? This song is the definition of a summer jam. Breezy, slinky, sexy and vocally impressive, Holiday is still somehow so underrated and should have made a bigger mark on the charts. We absolutely adore Jade’s whispery vocals on the pre-chorus and Perrie’s bombastic voice on that catchy, golden hook. A bona fide album highlight that’s ranked as the second-best song on our list.

We love love love this song! Straight from the first beat, Break Up Song is the perfect 80s retro throwback with a modern pop upgrade. Kind of like a more euphoric version of Shout Out To My Ex, the girls really pull out all stops in this perfect album opener. And don’t get us started on that catchy chorus – Break Up Song is unavoidable. To be honest, we thought this song was easily the best song on Confetti.

So that wraps up our ranking of Little Mix’s new album, Confetti. The first half of the album was no doubt a little stronger than the second half, but there’s definitely a song for every Little Mix fan on this album.

Now it’s time to hear from you! What was your favorite song? Tell us how you would rank every song on Confetti in the comments below…

Who is your favorite vocalist out of Jesy, Perrie, Jade and Leigh-Anne? Check out our ranking of singers in Little Mix.

Passionate about all things music, Fred is an experienced music content writer with a speciality for writing exciting and detailed music reviews, entertainment articles and press releases. With his finger constantly on the pulse of pop culture, Fred lives and breathes all things music, movies and celebrities. His favourite artists are Mariah Carey, Britney Spears, Brian McKnight and Blackpink. Nothing excites Fred more than listening to a new release and telling other music lovers about it. 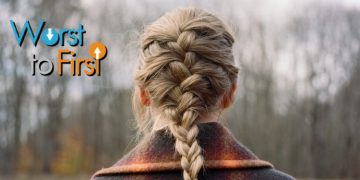