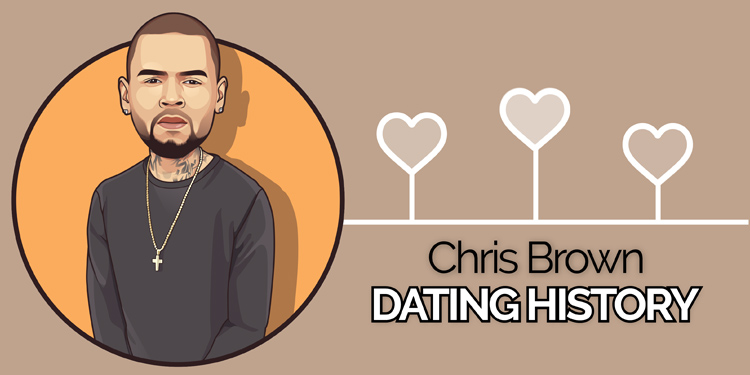 After a decade in the spotlight, Chris Brown has made headline news for a number of reasons, from bust-ups with celebs (that Drizzy fight) to his impeccable dance skills and killer vocals; but what’s resonated most, is his love life.

We first became invested in Breezy’s romantic relationships when he hooked up with Rihanna, providing us with images of the fairy-tale romance that we dreamed of. Sadly, that same romance unfolded in front of our eyes (with the horrific beating), making us question Chris Brown’s capability to love.

Since then, the No Guidance singer has evolved into a man on the hunt for the one (with a few set-backs along the way). To find out who he’s hooked up with along his journey, continue reading Chris Brown’s dating history below…

Chris Brown and Rihanna’s relationship blossomed into a real love story in 2007 (after being friends for two years). The two teens seemed like the perfect match and were very much in love – they were both at the height of their careers and seemed to have it all. Yet, in 2009, the pair got into a violent conversation where the R&B singer assaulted Rihanna.

After such a tragic circumstance, you’d think that their love story would be over for good, but it wasn’t! In 2012, the pair had seemed to rekindle the flame and even made a song titled Nobody’s Business, but the new relationship soon fizzled out when RiRi questioned his love affairs.

Natalie Mejia was reported as the rebound after Chris’ split with Rihanna when the pair were spotted at a tattoo parlor together. Although Natalie confirmed the rumors, Chris’ spokesman denied all claims, confirming that they simply happened to be in the same place, at the same time.

The Undecided singer was also linked to his hometown ex, Erica Jackson following his break up with RiRi. They supposedly reconnected when Chris visited Virginia, but it seems that she was just a rumored rebound.

In 2009, Chris Brown was also linked to model Joanna Hernandez following a series of pictures together. However, nothing further came of it, so it was either a quick fling, or there really weren’t any romantic sparks there!

In 2010, Breezy was spotted out in Miami with ex N.E.R.D. singer Rhea. Photos were taken after a party, so there’s no confirmation that they were romantically linked, or if it was a one night only, type of fling!

In late 2010, it seemed that Chris Brown had actually met a potential partner in the form of ‘Golden Barbie’, Jasmine Sanders. The R&B singer didn’t confirm if they were dating, but in 2019 when they were pictured together again, he admitted that they were “just friends”. Soon enough, Chris lost interest and was onto his next subject.

The pair were first spotted rubbing shoulders in a Miami nightclub in 2010 and seemed to cosy up for pictures over the years, but nothing further was released about their on-again, off-again relationship.

After meeting Karrueche on a set in 2011, it appeared that Chris had finally met the girl for him, but the relationship was far from stable. Filled with drama and turmoil, the couple were doomed to fail from the beginning as Karrueche couldn’t wrap her head around his friendship with ex, Rihanna (and rightly so?!).

The pair even had a public spat on social media where Chris revealed some intimate details in a post (involving threesomes and his lack of focus on his career to make room for the new girl in his life). They continued to argue publicly until 2017, but the model finally confirmed that she will never take Chris back and that although she loves him, he caused her too much pain and made her look weak.

Chris and Nia had a one-night stand in 2014, which completely destroyed his relationship with Karrueche. But Breezy confirms that he doesn’t regret his infidelity with his baby mama, Nia as it gave him the most precious gift on the planet – his daughter, Royalty.

In late 2014, Amber and Chris were spotted getting extra cosy in a club together, when the model appeared to be twerking on the singer. Following their encounter, Amber made it clear that she wanted to be his next girlfriend, but the feeling wasn’t mutual. Chris Brown had his eyes set on winning over Karrueche Tran.

Who is She? Victoria’s Secret Model
Dated In: 2014

The two were pictured getting very cosy together in public, but it’s speculated that their short-lived romance was formed to get Chris’ ex, Karrueche, jealous. Whether it’s true or not, you can’t deny that the pair made a cute couple – except Anara is good friends with Karrueche, so scrap that.

While the famous pair claim that they’re ‘just friends’, their sexual chemistry has been undeniable over the years. From their raunchy video for Body on Me and their closeness at award ceremonies across the years, it’s hard to deny that there’s been a thing between them. In 2018, he later commented on a bikini pic, calling the British singer a ‘penggal’ (translation: beautiful girl), adding flames to the fire of a romantic relationship.

After collaborating on the song Player, it seemed the pair built a close relationship. So close, that they had a private romance without the press getting light of the situation. But Brown’s admiration for Tinashe turned sour when she didn’t defend him in public and said that it wasn’t her decision to work with him. In true Chris Brown style, he took to social media and immaturely compared Tinashe to a “hobbit”! That’s one way to end a relationship.

In 2017, Chris had moved on from the drama and found a new love interest: Vanessa Vargas. However, his adoration for RiRi seemed to mess this one up, too. During his tour, Chris commented on one of Rihanna’s posts, wishing her mom a happy birthday, which made Vanessa question whether the popstars were still in touch.

Although Chris and Agnez got extra close in the music studio, it’s uncertain whether the pair actually dated. They may have been inseparable at DJ Khaled’s party, but it seems the relationship didn’t progress into anything further.

Following Cardi B’s split from fiancé Offset, the media decided to speculate that she’d found a new romance with Chris Brown. He wasn’t too pleased with the comments and shared a viral video of a boy saying “he doesn’t have time for gossip now”, putting a definite end to those dating rumors.

Chris and DaniLeigh were rumored to be an item back in the summer of 2019 following the release of their collab, Easy (Remix). The music video showed the pair getting up close and personal and an Instagram caption fueled speculation that they were indeed hooking up. But, like many other duet collaborators, nothing came out of this relationship.

Right before Chris Brown found comfort in his (second) baby mama, he was said to be dating Indyamarie, a cutie who he met on the set of the Type of Way video. The duo were supposedly together for a month, but Indyamarie broke it off when she heard Breezy had a baby with Ammika Harris.

The Undecided singer was first linked with current girlfriend Ammika in 2015 but the duo were spotted together again in 2019. But, of course, no Breezy relationship would be complete without a scandal. The following day Chris was accused of assaulting another female and was imprisoned for two days, after being released on false claims. The Karrueche look-a-like, however, stood by her beau’s side and supported his decisions. Their relationship was so tight, that they had a baby boy together, Aeko in 2020, but as expected, they also broke things off!

Chris moved on from his baby mama and fell into the arms of Diddy’s ex, Gina V. Huynh. The singer was spotted holding hands with the fitness model in October 2020 on the set of the City Girls music video and it’s safe to say they looked pretty tight! Let’s hope she’s in it for the long run and this is the last girl we see in Chris’ relationship timeline!

Although Chris’s dating history has been full of drama and infidelity, it’s clear that he invests his entire heart into a long-term romance and is seemingly trying to find the one for him. But will that one ever compare to the love of his life, Rihanna?

Do you think RiRi and Chris should be together? Let us know your thoughts on his past relationships in the comment section below.

Want more on Breezy? Have a read through these 30 facts about Chris Brown you may not have known until now!