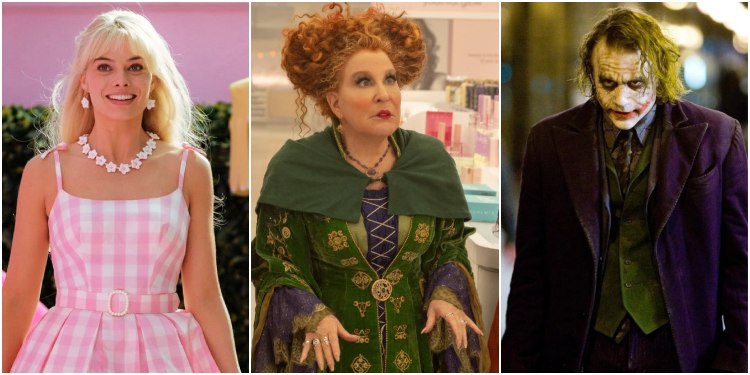 Halloween will be on our doorstep very soon, which means it’ll be time to pick a costume for the big day. You’re bored of dressing up as a basic witch, you’re tired of seeing ghosts roaming the streets, and it’s pretty boring just painting your face.

So, if like most people at this time of year, you’re not quite sure what to choose from the wide range of options pop culture has to offer, we’ve created a list of the best and most iconic movie character costumes to dress up in.

From monsters to pirates, princesses to alien creatures, this list has everything one needs to be the life of the party this October – or any other cosplay event for that matter.

When it comes to the bad guys from movies, Darth Vader is up there with the best. (Or rather, the worst). If your plan for Halloween is to absolutely scare the living hell out of every child you encounter, this strikingly accurate dark Star Wars costume, complete with the infamous cape and iconic mask, will make you the most terrifying sight in your neighborhood.

Are you witty and heroic all at once? Do you want to make people laugh while saving them from danger? Then this Marvel costume is for you! Although we can’t guarantee that you’ll be able to regenerate like Wade Wilson, we can at least promise you that this unforgettable red jumpsuit will look cooler than all of the Avengers and X-Men combined.

Halloween and Chucky are like peanut butter and jelly: you’d be crazy not to pair them up! Although he’s supposed to be a children’s toy, Chucky notoriously decided to change jobs along the way by becoming a serial killer. And you too can switch careers this Halloween by getting yourself this horror movie costume. Add a plastic knife to the mix (plastic, we said) and you’ll be in everyone’s nightmare for years to come!

You can’t go wrong with Tarantino. This Kill Bill outfit will have even your greatest friends step carefully away from you as you walk by, and your exes definitely won’t want to mess with you anymore. This licensed costume from Tarantino’s masterpiece is a must-have for anyone who wants to be both sexy and vindictive for Halloween, a state of being we all aspire to.

You thought we’d make a list of the best movie costumes without adding Cher’s from Clueless? As if! If you remember the iconic teen movie and Cher’s even more iconic yellow outfit, you’ll know that this is the best choice you could make for yourself this October. Ask your parents for one of those old cell phones that are the size of a toaster, and you’re good to go!

While we’re on a yellow theme, this inflatable Minion costume might add some color to your Halloween if you’re tired of the dark, broody shades. This outfit is made for adults but you’ll suddenly feel like a child again! Who said Halloween was only meant for the spooky and heroic stuff?

Do you need an excuse to eat your weight in chocolate this Halloween? Look no further than this stylish, colorful Willy Wonka costume, which will make it impossible for your loved ones to put a stop to your sugar cravings since you’ll be the master of chocolate himself. Don’t reveal the address of your factory to any child who hasn’t earned a golden ticket!

Fancy being nothing scarier than a nice cowboy for Halloween? With everything that’s going on in the world, we’d understand if you want to take things a little bit gently this year and pay tribute to the most heartwarming Pixar movie that ever was. This simple but colorful Woody costume won’t magically turn your voice into Tom Hanks’, but it’ll certainly make your Halloween a night to remember.

This gorgeous Cinderella outfit will look fabulous on anyone who wants to be the belle of the ball. Cinderella is royalty and the ultimate Disney princess, so you’d be wrong not to parade around in this outfit to give everyone something to remember.

This Harry Potter costume idea might have been worn by everyone in the world, but it remains a must-wear for this spooky season. Become the boy-who-lived and get ready to go on wild adventures with your friends, from destroying the Dark Lord to going trick or treating with your little cousin. Depends on your schedule.

Everyone has once dreamed of being a ghost hunter. It’s a spooky profession, yes, but isn’t it ten times better than any office job? Well, you no longer need to sleep to see this wish come true: with this badass Ghostbusters uniform and its inflatable backpack, you’ll be ready to catch every single ghost in your city and beyond.

Whether or not you live by the sea and regularly talk to it, this Moana costume is perfect for any fan of the polynesian princess who wants to flaunt their Disney knowledge at a Halloween or cosplay party. With its beautiful dress and hypnotizing toy necklace, you’ll look like you’re on your way to save a whole village even as you’re walking into the supermarket.

We don’t know how many archeological discoveries you can make around your house, but this Indiana Jones outfit will make you feel like every outing is a new adventure and nothing is impossible! Just make you sure you and your friends don’t trespass to dig out treasures in someone else’s backyard, and you’ll be ready to go.

Feel like ruling a secret, highly advanced country and saving the world with the Avengers in your spare time? Then you and this Black Panther costume are a match made in heaven. You’ll be so agile and fast that enemies will be unable to catch up with you to ask you where you’ve bought it.

Going for a Tim Burton character on Halloween is like eating turkey for Christmas: it’s expected, but not wildly original but everyone loves it anyway. Complete with scissor-gloves (not real scissors, of course), a wild wig and a beautiful gothic vest, this outfit is perfect for anyone who wishes to do something both traditional and unforgettable.

Fluffy costumes are rarely the first thing you think of when someone says “Halloween”, but in the case of this bright blue Sully costume and its assorted headpiece, anyone who has seen the Pixar masterpiece Monsters, Inc will wish they’d had the same idea as you!

Let’s head to a whole other planet with this beautiful and easy Neytiri costume from James Cameron’s mind blowing blockbuster Avatar. This blue jumpsuit, its apron and lovely accessories will make your fancy dress night so otherworldly you’ll be shocked to still be on earth when morning comes.

If anyone is dressed as Dorothy this Halloween, they’ll want to think twice before crossing your path. Anyone who ever said something nasty to you will regret it with just one glance at your black dress, pointy hat and terribly long fingernails. A movie Halloween costume that’s incredibly fitting for the occasion.

This deluxe Joker costume is no joke. If you’ve once fantasized about becoming Batman’s best antagonist there ever was, your dream can come true with this sordidly perfect purple and green outfit, complete with a frightening clown mask that’ll make your enemy shiver until next Halloween.

20. Pirates of the Caribbean Costume

Ever dreamed of sailing the seven seas and get your hands on heaps of gold? Even if it’s only for a night, this Jack Sparrow costume might just be your best bet to bring this ambition to life. This supreme outfit has everything you can hope for, from a pirate jacket, vest, belt, and every little accessory that makes a pirate a pirate. We promise you that no outlaw has ever looked that good!

If Daphne is your absolute favorite Scooby-Doo character, then you pretty much know who you’re dressing up as this Halloween. The ultimate movie character costume for those who are just as bubbly, fun and loving as Daphne Blake.

There’s no movie character costumes list without the one and only Dark Knight, right? If you fancy dressing up as the greatest superhero this Halloween, this cool and badass Batman costume is the way to go. An officially licensed Bat-suit which comes with boot-tops, a utility belt, a mask and a cape.

Oh, Sandy, baby! This costume is great for dress-up, an upcoming cosplay party or Halloween trick or treat night! Sandy from Grease is the epitome of sweet and sexy combined in one, so if that’s how you’d describe yourself this October, look no further than this iconic film costume!

Being the Princess of the Amazonians can come easier than you think if you look the part. All you need is this outfit, plus a touch of Wonder Woman’s belief in the good nature of humankind (sold separately).

With all these options of famous movie costumes, you might as well be set for the next ten Halloweens!

Whether you want to terrify people, make them smile, laugh, or cry, you can’t go wrong with any of these iconic movie character costumes – except if you put them on inside out.

READ NEXT:
15 Easy Celebrity Costumes for Dress Up 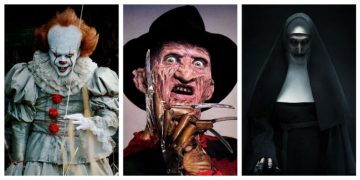