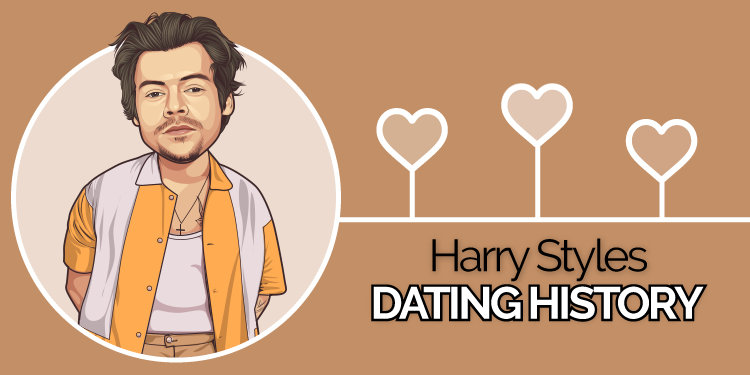 Since his rise to fame on The X Factor in 2010, Harry Styles quickly gained the adoration of all fans from around the globe. The cheeky chap was so irresistible, it wasn’t long before ladies lined up to become his girlfriend.

It comes as no surprise then, that this eligible bachelor has a long list of exes; many including Victoria’s Secret models and other famous TV personalities.

To find out what it takes to become his love interest, let’s dive into Harry Styles’ dating history and uncover the ins and outs of his past love affairs!

Who is She? TV Presenter

As soon as Harry laid eyes on Caroline (presenter of The X Factor at the time), he had an instant crush on her. The singer made no effort to keep his admiration a secret, either as he told journalists and friends that he fancied the famous TV host.

After the show, the pair started dating when Harry was 17 and Flack was 31. But once the news leaked in the press, it all went downhill for the lovebirds. Caroline started getting death threats and had to call it a day.

Following his split from Caroline, Harry moved on with American model, Emma, who also appeared in One Direction‘s music video, Gotta be You. While the stud denied that he was in a relationship with Emma, the pair were spotted locking lips after a night out in Auckland. And as soon as the news went public, Emma also received a number of threats, which then forced her to delete her Twitter account.

Who is She? Actress

Another of Harry’s short-lived romances involved British actress, Emily Atack. The star who is also much older than Harry confessed that they had a fling, but were never anything more than ‘a bit of fun’.

She did send the media into a storm when she tweeted, “Does Harry from One Direction have to be 16?”, proving from then that she had a crush on the young star.

Who is She? Reality TV Star

In 2012, Harry also dated an older star, Caggie Dunlop who was five years his senior (we are definitely starting to see a trend here). The pair were first spotted getting friendly in a nightclub together and were also seen getting close throughout the coming months, but both parties denied that there was ever anything between them.

Harry’s romance with fellow popstar, Taylor Swift was the talk of the town in 2012. When pictures first emerged of the pair taking a stroll in Central Park, many fans went into a frenzy. Sadly, the fairy-tale romance was short-lived and the celebs split in 2013. But all isn’t terrible, the end of their relationship was the soul of some of Taylor’s epic songs, including I Knew You Were Trouble, I Wish You Would and Harry’s Two Ghosts.

While we really wished this one was true (can you imagine how beautiful their babies would be?!). Sadly, it was just a rumor, which Harry set straight in 2013. After watching The Book of Mormon together, it was speculated that the pair were romantically linked, but Harry confirmed that he and Cara were nothing more than friends during an interview with MTV News – “she’s not my girlfriend!”, he said.

Who is She? Singer & TV Personality

Harry slipped back into his old ways in 2013 and dated yet another of his seniors. Nicole was 35 and Harry was 19 at the time, and the singers shared a short and secret romance. It was rumored that neither of the celebs took their romance seriously and just enjoyed their time together. Shortly after, Nicole went back to her beau, Lewis Hamilton.

In 2013, Harry embarked on another short romance with an elderly woman, and this time it was with Rod Stewart’s daughter, Kimberly. The pair were spotted in West Hollywood dining with the whole of the Stewart clan. Yet, neither Harry nor Kimberly confirmed or denied the rumored hook-up.

Who is She? Writer & Performer

After Harry and Erin were spotted at a pumpkin patch in 2014, the question on everyone’s lips was “are these two more than friends?” Their meal following the pumpkin date sparked further rumors – but this string of outings didn’t turn into anything more than “just a bit of fun”.

After grabbing dinner together at Nobu, it was alleged that these famous faces were in a relationship. Especially after Katy’s fall out with Harry’s ex, Taylor Swift, fans speculated that their feud also had something to do with Katy dating Harry. It was even rumored that Katy called Harry “cute”. But there’s no denying that, is there?

Sadly, this affair was nothing more than a rumor. The speculation came after Harry wrote a song for Ariana’s album titled, A Little Bit of Your Heart. Fans instantly suspected that the song was about the popstar herself, but Ari set the record straight during an interview with an Australian radio show saying that “He is a very, very, very nice boy but I’m not like… He’s just a nice friend”.

Harry made his first move in the model world with Nadine Leopold and the pair seemed to share an intimate and happy relationship – until Harry messed things up!

Following the break up, Nadine confirmed that her reasoning was because she wanted a bit more from Harry, but he just wasn’t giving her the commitment that she needed. She then decided to put an end to Harry’s game playing.

After getting a taste for Victoria’s Secret models, Harry became obsessed. His next romantic endeavour was with Sara Sampaio, and while it was nothing official, the pair seemed to enjoy a romantic night together.

The angel-faced model was papped leaving Harry’s New York hotel wearing the same outfit she entered in the night before. Sadly, nothing further came of this fling.

Who is She? Model & Reality TV Star

What started off as a friendship, clearly surfaced into a love story The pair were snapped on numerous occasions, but the images that captured the hearts of the nation were those of Harry and Kendall cuddling on a yacht while celebrating the New Year together. But despite their close relationship, nothing was either confirmed or denied from the pair themselves.

Who is She? Fashion Stylist

During his on-again, off-again relationship with Kendall Jenner, Harry was spotted leaving Pandora’s house, suggesting that they had spent the night together. Whether it’s true or not, the images surfaced a few weeks after Khloe Kardashian had confirmed that her sister and Harry were indeed dating, and he had cheated on her.

Who is She? Celebrity Chef

Harry’s dating history involved celebrity chef, Tess Ward. These two shared a brief romance in 2017, but many critics claimed that Tess had an ulterior motive and just wanted good press. Proving everyone wrong, Tess split with Harry and got back with her ex.

Marking one of his longest relationships to date, Harry dated yet another Victoria’s Secret model for an entire year. He even introduced the model to his family and Camille was spotted hanging out with Harry’s mum at one of his concerts – proper girlfriend material! However, things came to an end when the pair called it quits in 2018. We’re still hoping a reconciliation is on the cards.

After the pair followed each other on Instagram, it was rumored that they had a thing for each other. Harry reportedly visited Kiko a ton during his visit to Japan, but the Japanese model put the rumors to bed when she tweeted, “It has been reported that Harry Styles and I have been in a relationship with him, but I have no relationship with him, and I have never met him…People believe what they want to believe rather than questioning reality.”

It’s clear from his long list of relationships that Harry has commitment issues or just hasn’t found the lady to capture his heart, yet. What we do know is that he has a clear taste – that being of older women and models.

What do you think of Harry’s dating antics? And who would you like to see him rekindle a romance with? Let us know by leaving a comment in the section below.