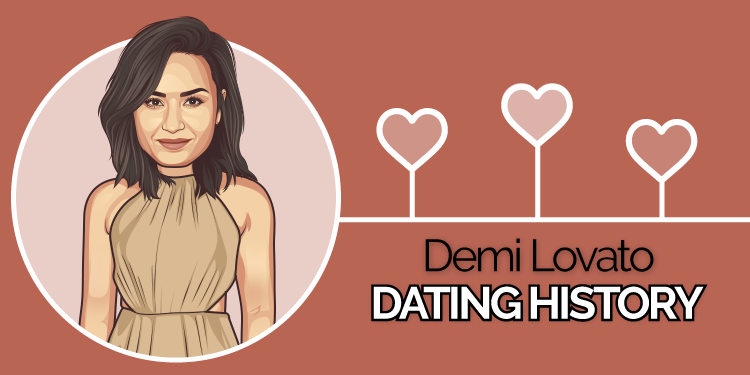 Demi Lovato is one of the very few celebs to air their dirty laundry, heartbreaks and mental health issues for all to see. She’s openly discussed past flames and has shown nothing but love towards her ex boyfriends.

While you might only remember her high-profile relationships with Joe Jonas and Wilmer Valderrama, Demi has actually had far more exciting flings!

Demi’s puppy love romance was with fellow Disney star, Cody Linley. This relationship had a rocky start, though, with an awful first date. To begin with, Cody was two hours late to pick Demi up; his car then broke down on the way to the restaurant, where Demi had to hold a flashlight for him to fix the car; then they made it to the steakhouse and he was late dropping Lovato back home. After that, it’s no surprise that the pair’s romance fizzled out after a while.

It was rumored that Demi and Alex had a brief fling, but according to a source close to them, the pair struggled as they had hectic schedules and didn’t see each other much. Demi’s song, Catch Me was inspired by their year-long relationship and explains the feelings that she had for her ex boyfriend.

Who is He? Guitarist

Indeed, Miley Cyrus’ brother has a place in Demi’s dating history. Demi dated Trace who was four years her senior in 2009, but their relationship only lasted 7 months. Like Alex, Trace was always on the road and the pair didn’t actually see each other much. Trace ended up calling it quits by admitting that it just wasn’t the right timing for them to be together. Nonetheless, the two celebs parted on good terms and only wished the best for each other.

It seems that every female celeb dated one of the Jonas brothers at one time or another (Taylor and Miley, we’re looking at you!), and Demi is no different. After filming two movies together (Camp Rock and Camp Rock: The Final Jam), the pair grew incredibly close and even dated for a while. However, their romance lasted just a few short months. Joe ended their relationship, claiming that he sees Demi as more of a friend. Surprisingly, the rejection didn’t leave a bitter taste in Demi’s mouth, and she openly congratulated Joe and Sophie Turner’s engagement in 2017! What a woman!

Demi’s longest and deepest relationship was with That 70s Show actor, Wilmer Valderrama. Demi was only 18 when she began dating 29 year-old Wilmer, and many critics were quick to judge their age difference. However, despite all the backlash, she seemed extremely happy in her relationship and described Wilmer as her rock.

Six years later, Demi announced their break up and explained that they were better off as friends. That said, Demi revealed in her documentary, Simply Complicated, that it took a long time for her to come to terms with being alone and discover who she actually was as a person. And despite her bad breakup with her ex, she was still happy for Wilmer when he announced his engagement to model, Amanda Pacheco.

Who is He? Basketball player

After her long-term relationship with Wilmer, Demi rebounded with Odell Beckham Jr. The pair were spotted on a few dates but nothing more was reported on their hook-up. Despite knowing that Demi was rebounding with him, Odell stated that he didn’t care and was enjoying hanging out and getting to know the singer.

Who is He? UFC middleweight champion

Lovato also casually dated Luke Rockhold in 2016 after meeting him while training at the same gym. They even got matching tattoos, but the ink didn’t keep them together. The pair seemed to be on two different pages when it came to their affair and they split before Christmas in 2016.

Who is He? MMA fighter

Shortly after her split with one pro-athlete, Demi showed interest in another. Demi and Guilherme were hanging out on New Year’s Eve and posted an array of cute pictures together. Sadly, the fling ran its course and the pair split in May 2017.

Who is She? DJ

Yep! It’s rumored that Demi once had a girlfriend! After being open about her sexuality, Demi seemed awfully closed with DJ, Lauren Abedini in September 2017. The pair were spotted holding hands in Disneyland and Lauren gushed about how amazing Demi’s new album was on Instagram. Whether this was just a super close friendship or something more is untold, but Demi confirmed that she was very much single during an interview with Entertainment Tonight in October 2017.

Who is He? Clothing designer

Henry and Demi shared a deeper understanding for each other as both spent the same time in a rehab centre several years prior. He was a sober companion for Demi and helped keep her on the straight and narrow after she’d relapsed in 2018. However, the pair split before she entered rehab for mental health issues in 2019. Demi needed time to focus on her thoughts and her healing, and her family members felt that her relationship was getting in the way of that.

Who is He? Bachelorette contestant

After crushing on The Bachelorette’s contestant, Mike Johnson on Twitter, the hunky star reciprocated the affection by commenting on one of Demi’s bikini pics. Following their social media exchanges, the pair were spotted sharing a few intimate dates together. “Demi Lovato and I went on a date,” Johnson confirmed. The romantic relationship didn’t last long, however. A month later, Mike openly asked out Keke Palmer, putting an end to his rumored relationship with Lovato.

Who is He? Model

Demi had another short-lived romance with her long-time friend, Austin and even made it Instagram official when she posted a cute, mirror selfie of them both. Just a month later, however, Demi deleted all traces of Austin on her social profiles, confirming that their affair was over. As always, she was super kind and considerate of Austin’s feelings and she asked a fan to not go after him and explained that he’s a good guy.

Demi and her new man looked like a match made in heaven – until things came crumbling down.

The singer and Young and the Restless star, Max Ehrich, met a few weeks prior to the Coronavirus lockdown, but got to know each other well during their self-isolation. She made the relationship official by appearing and dancing together in Justin Bieber and Ariana Grande’s video for Stuck With U and in July 2020, Demi announced her engagement.

But just when we thought Demi had found her prince, it was announced that the duo had called off their engagement. A source told People, “It was a tough decision, but Demi and Max have decided to go their separate ways to focus on their respective careers. They have respect and love for one another and will always cherish the time they spent together.”

Despite Demi’s history of failed relationships, we’re hoping that she soon finds her prince charming and finally finds her perfect match.

Which of her beau’s do you think Demi is best suited to? Is it her ex-fiance, Max or her longtime ex-boyfriend, Wilmer? Let us know by leaving a comment in the section below.