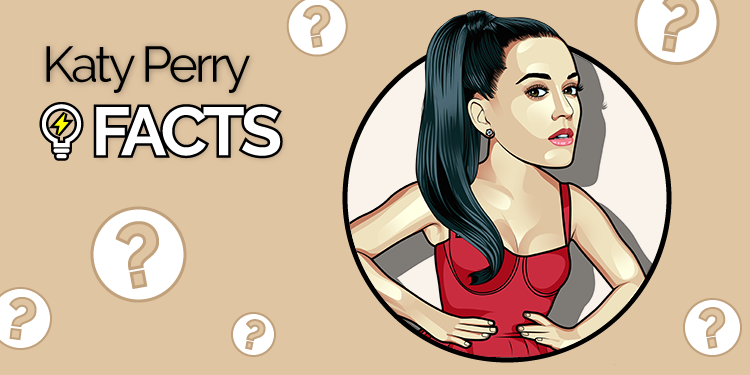 Since her rise to fame with her hit single I Kissed a Girl, Katy Perry has blown into a bonafide superstar. But despite her killer vocals and memorable hits, Katy’s fun personality and high-profile love interests have all been a key point of her celeb status.

From having an incredibly strict childhood to delivering her sister’s baby, there are still a lot of interesting facts that you may not know about the Small Talk singer’s life.

So without further ado, let’s dive into our list of fun Katy Perry facts…

While “Katy Perry” has a real ring to it, the quirky celeb’s actual name is “Katheryn Hudson”. Yet to ensure there’s no confusion with the actress and to “protect herself”, Katy took her mother’s maiden name and used it as her stage name instead. Katy revealed to The Guardian that she “hated” being Katheryn Hudson and created this “character” due to a traumatic childhood –

“A lot of people are living in fear from something that happened in their childhood, or some form of PTSD they picked up along the way, and I created this wonderful character called Katy Perry that I very much am, and can step into all the time, but I created that character out of protection,” she says. “I was scared that if you saw me, Katheryn Hudson, the girl wearing the Bioré strip on my nose, you’d be like, ‘that’s not glamorous’. It was me going, ‘OK, I’ve been upset my whole childhood so I’m going to show the world I am something, that I am going to do something and that I am enough’. I didn’t want to be Katheryn Hudson. I hated that, it was too scary for me, so I decided to be someone else.”

2. She had a Strict Upbringing

Katy admits to having a tough childhood. Her parents, Keith and Mary Hudson were religious pastors who brought Katy and her siblings up in an evangelical household. Katy wasn’t allowed to listen to certain music, or do regular kid stuff like read Harry Potter books or watch The Smurfs as a child. Luckily, she caught up in her adult life and even became the voice of the magical animation in 2011.

3. Katy Started Off as a Gospel Singer

As she was brought up in a Catholic family with both her parents being pastors, Katy started singing in a Gospel choir. In fact, it was the only genre she was allowed to listen to as a child. After finding her own personality though, Katy ended up moving into her own style of singing – much to her parent’s disappointment.

4. Katy’s Family Weren’t Proud of Her

Katy was brought up in a conservative family where “homosexuality was synonymous with the word ‘abomination'”. She was even forced to go to youth groups that were pro conversion camps. But going against the grain, and her parents beliefs, Katy decided to release her first single (I Kissed a Girl) with the controversial bisexual lyrics. Her mother reportedly said, “I hate the song. It clearly promotes homosexuality and its message is shameful and disgusting.”

Mary Hudson even went on to slam Katy’s outfits as “too revealing” and said her career was a “period of rebellion.” The singer got so mad that she tweeted: “Concerning the gossip, I want to be clear that NO ONE speaks for me. Not a blog, magazine, ‘close sources’ or my family”. Despite the messy relationship with her parents, Katy has since forgiven them and reconciled with her mom and dad.

5. She Got Divorced by Text

After a whirlwind romance and shotgun wedding, it seemed like Katy Perry had found her soulmate in Russell Brand – but that was far from the truth! The British comedian told Katy that we wanted a divorce via text. At the time, Russell revealed in his 2015 documentary that their relationship tore apart because Katy was the kind of person he hated – “I’m associated with the very thing I detest: vapid, vacuous, plastic, constructed, mindless celebrity.” He soon changed his tone later on by saying the real reason they broke up was actually due to Katy being “occupied” and “busy”.

Katy Perry’s romances may have been rocky in the past, but she’s finally settled down – with every girl’s dream man! That’s right, Katy is engaged to Orlando Bloom and they’re expecting a baby girl together!

7. Katy Has a Weakness For Asian Food

Here’s a fun fact about Katy! She isn’t one to calorie-count and embark on fad-diets; instead, she enjoys lots of tasty treats. Her favorite indulgence is Asian food, including crispy beef and yellowtail sashimi. Same girl, same…

Katy dropped out of school at the young age of 15 to focus on her singing. However, she later admitted that she wishes she stuck it out and got an education. Either way, she’s not doing so bad for herself without a few qualifications.

9. She Wears the Same Tracksuit Every Day

To catch a break from the paps, Katy Perry wears the same Adidas tracksuit wherever she goes. She does this to devalue their photos to ensure the paps can’t use them. A picture of the same loungewear won’t make it to any glossy magazine, right?

A lot of us battle mental health issues, even superstars who appear to have it all together, like Katy Perry. In a livestream with fans in 2017, the star broke down in tears explaining that she battled with alcoholism and depression, “I wrote a song about [suicide].I feel ashamed that I would have those thoughts, feel that low and that depressed. You can be right or you can be loved. I just want to be loved.”

Katy Perry swears by transcendental meditation and says that it’s a complete “game-changer”. To master the technique and follow in Katy’s footsteps, you need to practice twice a day for 20-minutes per session to get to a state where you can open your neuropathways and picture a bright light.

12. Her Pets are Pretty Famous Too

Katy has a huge love for animals! She’s got two dogs, Nugget and Butters and previously had a cat called Kitty Purry – pretty genius! In fact, her pets have acquired a similar level of fame as their owner! “Nugget Perry” has his own Twitter page and his bio says “I’m such a bitch”. This is the kind of trivia that makes you love Katy even more!

13. Katy Is the First Female to Have 5 Number 1 Hits From a Single Album

Here’s an interesting fact that shows just how successful Katy is! She made Hot 100 history in 2011 when she was crowned the first female artist to have five number 1 hits from a single album. The only other artist who achieved this title was Michael Jackson.

14. The Star Created Her Own Barbie Doll

Katy Perry got her own Barbie Doll to raise money for charity. The one-of-a-kind Barbie was inspired by Katy’s cupcake dress and featured 70 hand-made cupcakes. The dress was auctioned for $15,000.

15. She Helped Deliver Her Sister’s Baby

This piece of Katy trivia might just blow your mind! In 2016, Katy played midwife and helped deliver her sister’s baby. After the event, she tweeted saying that she can add baby deliveries to her resume. You gotta be brave to do that!

16. She is Also a Songwriter

Katy is a woman of many talents – she not only has killer vocals, amazing stage presence and is a reality TV judge, but she is also an amazing songwriter. A few of her great hits include: Kelly Clarkson’s I Do Not Hook Up, Britney Spears’ Passenger and Iggy Azalea ft. Rita Ora’s Black Widow.

Weirdly, Katy Perry owns locks of Taylor and Miley’s hair, which she has kept in her purse. She was such a fan-girl that she put bows on them and kept them as a memoir from the stars. Talk about weird! It’s especially strange considering her ongoing feud with Taylor!

During an interview with GQ magazine, Katy admitted that she’s a spiritual believer and definitely thinks that aliens exist. She said, “Imagine: how self-important are we to think that we are the only life-form?” Excuse us as we explore alien conspiracies…

In 2012, Katy celebrated her 28th birthday by having lunch with the First Lady. It was definitely a day that she’ll never forget as she’s always been a huge supporter of the Obama family.

20. She Made her Own Perfume Dedicated to Kitty

Katy Perry loved her feline friend so much that she created a fragrance that reflected her rescue cat. The cat-shaped bottle called “Purr” was a favorite among many drugstore counters.

21. She Had Her Scene Cut From Get Him to The Greek

Perry was engaged to Russell Brand at the time of filming, but she had her scene cut out because, according to Russel himself, it was too “cheesy”. The shameless comedian told Ryan Seacrest that Katy’s acting was “atrocious”, which led to the directors completely removing their kissing scene. Poor Katy…

Katy has taken her obsession for Disney to a whole other level! She has an exclusive VIP pass to Club 33, which is a member-only restaurant at Disneyland! The popular celeb even admitted that she was an amusement park junkie during a Vogue magazine interview and has dressed up as her favorite characters on numerous occasions.

From alien conspiracies to owning Taylor Swift’s hair, it’s fair to say Katy Perry is one heck of a unique character – but that’s exactly why we adore her!

Which facts about Katy Perry were your favorite? Let us know what you like or dislike about the star in the comment section below…