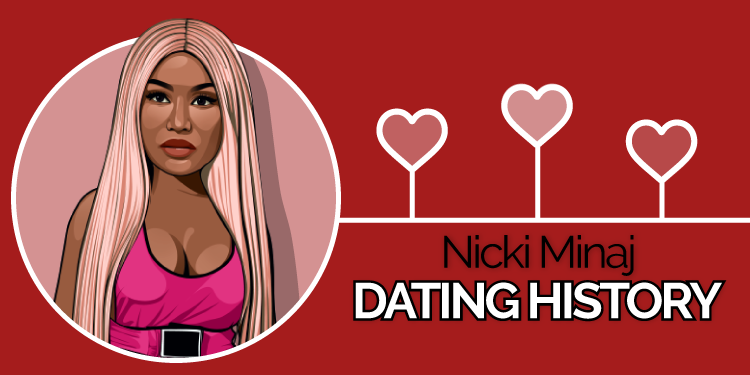 When Nicki Minaj first came on to the music scene, she kept her relationships under wrap, making sure that people knew her for her fierce verses and Barbie alter-ego, rather than her hookups.

As anyone who lives in the limelight, details on her break-ups and make-ups leaked through the cracks, allowing us to see a glimpse of the rap queen’s personal life. From Twitter spats with exes and rumored hookups with the hottest rappers around, Nicki has shown that she has a specific type when it comes to dating.

To find out more about who made the elite few that cosied up to the popular star, continue reading Nicki Minaj’s dating history below.

Nicki’s first bae was an older guy named Aaron, who she dated while attending LaGuardia, the prestigious performing arts school in Manhattan. As young love filled her life, she accidentally fell pregnant with Aaron, but decided to abort the baby, as she reveals on her album, The Pinkprint.

During an interview, The American Idol judge told The Rolling Stones that it was the hardest thing she’s ever had to do, but she made that decision because she had nothing to offer her baby. So, Nicki took some time out and focused on crafting her art to become the biggest female rapper before focusing on love, again!

In 2002, Nicki met her new love interest, Safaree when she joined hip-hop group, Hoodstars. It took two years for her affection to blossom for her bandmate, and while everything seemed like a fairytale at first, their relationship spiraled into a whirlwind of destruction.

In 2011, the pair got into an altercation in a Dallas hotel with Nicki claiming that her boyfriend hit her in the face. But later on that year, it seems like the scuffle was brushed under the carpet when it was rumored that the rappers were engaged after Nicki was spotted wearing a big diamond ring.

In 2014, the pair parted and embarked on a very public spat. The rap queen took to Twitter to accuse her ex of lying and blackmail, but later deleted her tweets. Safaree then took a dig at his ex, claiming that he wrote her album. He then back-tracked but sued Nicki with claims that he had a major influence on her album and wanted a chunk of money for it.

In 2017, Safaree dropped the claims, but the feud wasn’t over yet. After interviews and public cussing, Safaree took to Twitter once more to reveal a time when Nicki chased him with a knife and stabbed him. Whether it’s true or not, it’s a good job that they both put the toxic relationship to bed.

It’s undeniable that the rappers have chemistry, but have they ever been more than friends?

Over the years, Nicki and Drake have flaunted at the idea of marrying each other. From outright lyrics on his track, Thank Me Later where Drake raps “I love Nicki Minaj/ I told her I’d admit it/ I hope one day we get married just to say we f***ing did it”, to tweets asking fans to refer to Nicki as “Mrs Aubrey Drake Graham”, and a pretend marriage in Nicki’s Moment for Life video, it’s clear that there might have been a romantic interest between the pair.

Drake has been honest about his affection for the queen of rap, admitting that she’d be the woman that he’d want to wed; on the other hand, Nicki has been more coy about her feelings, clearly stating that they are just friends, but her actions have shown otherwise. From the infamous lap dance in her Anaconda video and her late night studio sessions, it’s clear that she has more than a soft spot for the Canadian rapper. For now, though, Drake has been friend-zoned as Nicki sparks romantic relationships elsewhere.

Although the sexual tension has been clear between the rap queen and her label owner, Lil Wayne, Nicki confirms that he’s always been a gentleman and respected her. They’ve flirted and cosied up together – they even kissed in her High School music video, making us wonder if their relationship goes beyond just a kiss?

Nicki shut down rumors by saying that Lil Wayne is definitely not her boyfriend and more like “her brother”. So, it seems like these two are just really good friends.

Unlike her relationship with Safaree, Nicki was eventually open about her love affair with Meek Mill, and for some time, it seemed like she’d finally met ‘the one’. With a series of loved up pictures on the Gram, followed by a heart diamond, which many assumed was an engagement ring, the pair confirmed their relationship status.

But after constant feuds between her boyfriend and long-time friend, Drake, it seemed like the pressure was too much for the Barbie Tingz rapper when she called it quits in 2017.

Following her split from Meek Mill, Nicki fell into the arms of another rapper – Future. When she was gifted a Chanel bag, fans speculated that it was from Future as his Story featured similar items from the designer.

After that, the pair went on a world tour together and it seemed like there was more than just a friendship, but neither of the celebs confirmed or denied the rumors, so we will never know if these two were official at one point.

Later that year, Nicki had been linked to yet another rapper. This time she didn’t confirm her relationship status, but did blush when she was questioned about it on The Ellen Show, simply saying that they were enjoying “sleepovers”.

The couple then posted identical pictures of them cuddling up on a date wearing matching chains, which confirmed that they were an item. But just under a year later, it was reported that the pair had gone their separate ways, marking another failed relationship for the high-profile celeb.

How much do you know about the biggest female rapper in the game? Check out our list of facts about Nicki Minaj nobody tells you about.

Fans went into a frenzy when Nicki responded to a tweet saying that she was dating the Real Slim Shady. They quickly figured they were being trolled by the rappers when Eminem tweeted, “Girl you know it’s true!” to which Nicki replied, “Babe, I thought we were gonna keep it on the low til the wedding”.

Knowing how private the star is with her relationships, it’s clear that she was just messing with us. That said, wouldn’t it have been nice if these two rap legends actually sealed the deal?!

In 2018, it seemed like Nicki and Lewis Hamilton had shared a short-lived romance. After appearing together at a fashion week show, the pair were also seen walking hand-in-hand to an event and then on holiday together, just a few days later.

During that trip they posted a similar picture of themselves on a quad bike in Dubai and were spotted in the hotel elevator together. After that though, things seemed to go quiet marking the end to their holiday romance.

After collaborating on a remix of Ella Mai’s Boo’d Up track, fans speculated that Nicki and  Quavo from Migos were an item due to her outro on the song. In the outro Nicki says, “Hello” to which Quavo replies, “What’s happening”. Nicki asks, “Babe, can you come and get me?” and Quavo states, “I’m outside.”

These rumors were left as speculation because later that year, Nicki got into a serious relationship with a new man…

Who is He? Convicted criminal
Dated In: 2018 – Present

Surprisingly, the queen of rap’s new love interest is far from a rapper. In fact, he’s not in the music business at all and is a convicted criminal with charges of attempted rape and manslaughter.

Known for a keen interest in bad boys, Nicki stands by her new man regardless of his complicated past. Apparently, Nicki knew Kenneth from a young age – their romance goes way back into their childhood when they had a small crush on each other. The duo even tied the knot after just one year of dating in 2018. But their marriage was hit by scandal a few months later when Kenneth was reportedly arrested for failing to register as a sex offender.

While fans are suspicious of Nicki Minaj’s husband, it seems like the rapper is happy for now.

With just a handful of men on her boyfriends list, it’s clear that Nicki is careful when it comes to love. But which bad boy do you think she should end up with? Can you see a marriage between Drizzy and Nicki instead? Or do you think they are better off just friends? Let us know your thoughts in the comment section below!

Nicki is famous for feuding with several famous faces. Have a look at Nicki Minaj’s biggest feuds in our list!

25+ Nicki Minaj Facts Nobody Tells You About