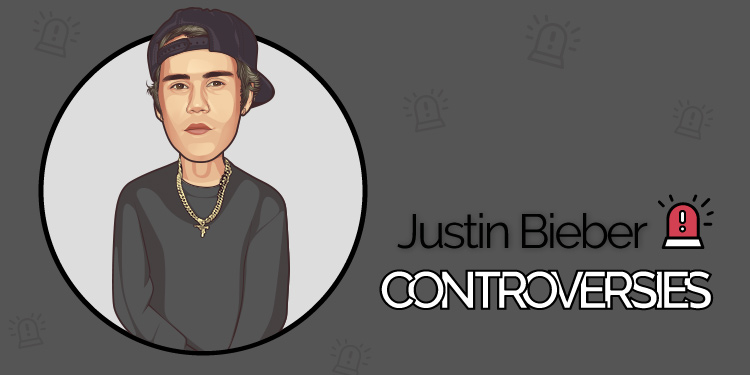 Having been in the fame game from such a young age, Justin Bieber’s every move has been publicized and scrutinized. While most teenager’s bad habits go undetected, Justin’s managed to gain a bad boy rep from his constant outbursts and run-ins with the law.

Although his behavior has taken a turn since he tied the knot with supermodel, Hailey Beiber (previously named Baldwin), the singer can’t seem to escape his past behaviour.

So, let’s take a trip down memory lane and relive the biggest Justin Bieber controversies and crazy moments of all time.

Having fame and fortune turned Justin into a bad neighbor!

After his neighbor, Jeffrey Schwartz confronted him about his reckless driving in the neighborhood, Bieber retaliated by throwing eggs at his house. The outcome wasn’t pretty, however! After Schwartz pressed charges, the young popstar was faced with two years probation and an $89,000 bill to cover the cost of the damages that his wild antics caused. It really is too late to say sorry to Schwartz!

2. Hitting the Paparazzi with His Car

While it must be annoying to have a camera shoved in your face 24/7, it is part of the fame game. And while most celebrities learn to cope with the invasion, the young popstar came to a breaking point.

When he was 23, Justin got a little too close when trying to scare a photographer off and actually hit him with his car. Luckily, the victim didn’t have any life-threatening injuries, but he did need immediate medical attention.

3. Spitting on His Fans

Most celebrities welcome their fans with open arms, but it seems like it all got too much for Justin. Living up to his ‘pop brat’ name, the star was captured spitting off his hotel balcony in Toronto onto a crowd of Beliebers.

While his pals found it amusing, his fans were far from impressed. But this isn’t the first time that the Yummy singer was accused of spitting. According to sources, he had also spat in the face of his nemesis neighbor, Schwartz.

4. His Strong Views on Abortion

At the young age of 16, Bieber revealed his strong opinion on abortion during an interview with Rolling Stones magazine. When asked about various social and political views, Justin admitted that he doesn’t believe in abortion, revealing that “it’s like killing a baby”. This opinion didn’t bode too well with his female fans and we can clearly see why!

5. Comparing Himself to Michael Jackson

Justin gets in trouble for being cocky and controversial! While it’s undeniable that Justin is a man of many talents, fans weren’t too pleased when he compared himself to pop legend, Michael Jackson. After posting a picture of himself next to a picture of MJ with the caption “what more can they say,” many critics were left furious with Justin’s self-confidence.

Justin’s dating life is always a hot topic! It’s no secret that the Purpose singer was romantically linked to fellow teen star, Selena Gomez for years in an on-again, off-again relationship. However, rumor has it that Justin found love with his wife, Hailey, while he was still romantically linked to Selena. While we hope that this is just a rumor, we will never know if it’s true as neither parties have confirmed or denied the statement.

During a trip to Japan, Justin visited the Yasukuni Shrine; a controversial monument which honors Japanese war criminals. Unfamiliar with this crucial part of history, Justin posted a picture of himself standing outside the historical building with the caption, “thank you for your blessings”.

After receiving floods of angry tweets from fans, Justin realized that the monument wasn’t a place of prayer and apologized profusely for his mistake.

8. Punching a Fan in the Face

This may be one of the biggest controversies Bieber has ever been muddled up in. During a trip to Barcelona, the angry teen got into an altercation with a fan, leaving him bleeding after he sparked him in the face. The fan approached Justin while he was in the car and touched his face, and within a split second, the popstar retaliated with his fist.

9. Getting Arrested for Drunk-Driving

After a court hearing, Justin posted bail of $2,500 and was allowed to return to his home without any further jail time.

10. When His Private Jet was Search for Marijuana

Having gained the bad boy reputation, Justin continued to have run-ins with the law. In what is one of Justin’s worst moments and after landing in New Jersey for Super Bowl celebrations, authorities rushed his jet while on the tarmac, claiming that there was a strong smell of marijuana.

After being interrogated for hours, sniffer dogs were let on board, but no illegal substances were found, allowing the Changes star to resume his planned celebrations.

11. Getting Carried Up the Great Wall of China

We all know that with fame, comes fortune and power, but Biebs took this to a whole new level when he was captured on his bodyguards’ shoulders as they ascended up the stairs of the Great Wall of China. This bad moment left a sour taste in fans’ mouths, perceiving the star as a spoilt brat that throws his power around to get what he wants.

Some may call Justin Bieber crazy – especially after this incident. During a visit to Anne Frank’s House while on a trip to Amsterdam, the popstar made a bold statement by saying that he thinks Anne Frank would have been a fan of his music. In the guestbook, Justin wrote, ““Truly inspiring to be able to come here,” he penned. “Anne was a great girl. Hopefully she would have been a belieber.”

This insensitive comment didn’t go down too well with the public, causing a fury of angry messages online claiming that the star turned a historical figure into a joke.

13. Getting into Yet Another Argument with Paparazzi

You probably had this video on repeat in 2013, but if you didn’t, let us remind you of his hilarious altercation with a London pap. Bieber emerges from his hotel and runs to his car when a pap violently tries to get a snap of the star. Having heard the cameraman swear at him, Justin emerges from the car and lashes out by asking the cameraman what he said, before proceeding with “I’ll beat the f**k out of you”.

While the rude pap deserved a piece of his own medicine, the video went viral with mixed opinions on Justin’s outburst.

14. Turning Up Two Hours Late to a Concert

During his European tour, Bieber turned up two hours late to a Manchester concert leaving fans furious when he finally emerged on stage. After getting out of bed late due to a heavy night out, the star threw a tantrum and refused to go on stage. Instead, he resumed playing video games backstage and appeared on stage when he wanted to, leaving hundreds of teenage girls upset as it was on a school night.

Following backlash, Justin denied his tardiness and said he was only 40 minutes late due to technical difficulties. We’ve all heard that one before…

15. Urinating into a Bucket

We all know that boys can be unhygienic at times, but Justin took it to a whole other level when he urinated into a mop bucket at a restaurant in 2013. To this day, Justin still defends his actions of urinating in the food preparation area, claiming that the bathrooms were on the other side of the restaurant and it was ‘too far’. I’m not sure if we can quite agree on this disgusting behavior…

Having calmed down over the past few years, Justin Bieber has started moving away from his bad boy image, but we can’t help but think it’s only a matter of time before he loses his rag again.

What do you think? Do you think Justin’s anger has been tamed for good? What other worst moments can you think of? Let us know by commenting below!

Want to read more shocking stories about your favorite celebs? Check out our list of the most controversial Miley Cyrus moments or Lady Gaga’s controversies!