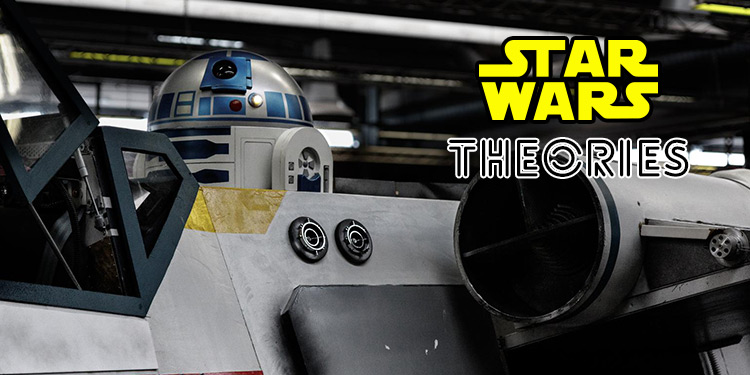 There isn’t a day where people aren’t talking about Star Wars. Whether we’re raving about the original cult trilogy, the early 2000s prequels, or the more recent sequels, the franchise is ruling global imagination more than ever before, and there’s no doubt that this will continue for a long time, if not decades.

To celebrate the ever-growing fame of the legendary galaxy, here are 16 Star Wars theories that will probably make you crave another marathon – just so you can decide how plausible they really are…

A first but not-so-crazy theory suggests that the beloved Chewie is actually a spy who worked undercover with the Rebel Alliance from the start – unbeknownst to his pal, Han, of course. Some fans have suggested that Chewbacca secretly led Han on Tatooine to meet Obi-Wan Kenobi and start fighting the Empire – that would explain why Obi-Wan so casually approached him at the cantina in A New Hope – they clearly already knew each other!

Jar Jar was far from being a fan-favorite throughout the prequels, but there might just be a fan-theory that somehow makes his character a little less useless – could it be that Jar Jar was a Dark-Force user all along? A secret Sith Lord? Did he actually use his powers to influence the events of the saga? After all, we do see him convince the Senate to give ultimate power to Palpatine, pull off some pretty impressive Force-assisted jumps, and we also often catch him moving his mouth in sync with other characters’ dialogue – which the Darth Jar Jar theory states is his attempt at Jedi mind-control. Coincidence, we don’t think so? Or at least, we hope it’s not.

One of the more uplifting, yet also heartbreaking theories suggests that Luke’s adopted parents, Uncle Owen and Aunt Beru actually became Stormtroopers. According to some devoted fans, Luke’s carers swapped places with those that ‘killed them’, and used their new job to sabotage the work of the Empire afterwards. However, the theory still says that they died at the end of A New Hope, which would be why Luke never crossed their paths again.

4. R2-D2 is Narrating the Whole Story

R2-D2 has been around since the very first Star Wars movie and throughout every important event to date. He’s also never had his memory wiped, unlike C-3PO, and been flawlessly heroic up until now – it’s therefore not impossible to imagine that the adorable little droid might just be the one narrating the entire galactic story. Could it be through his eyes that we’ve watched all nine movies? We’re absolutely on board with this!

Call yourself a die-hard fan of the saga? Know someone who’d appreciate some merchandise? Check out our selection of Star Wars memorabilia to get your hands on!

This wild Star Wars theory suggests that Han Solo had the Force beside him all along. If so, it would explain why he succeeded in so many of his endeavours, even the craziest ones (like navigating through a dangerous asteroid field or surviving carbonite freezing), and why his son, Kylo Ren, eventually ended up with so much Force within him. With Han Solo already being badass enough, we can’t imagine how crazy fans would go if this theory was ever confirmed.

6. The Force is Basically the Best Armor Ever

A theory that absolutely holds up is that the Force protects those who are sensitive to it from being hit – this would explain why Luke and co. always escaped those Stormtrooper blasts so effortlessly. And of course, this would support the theory that Han is a Jedi.

We might have loved Liam Neeson in The Phantom Menace, but a strong theory running around is that his character, the wise and steadfast Qui-Gon Jinn, might not have been the best on the team. He does fail several times to sense danger and doesn’t succeed in using the Jedi mind-trick when necessary. We’d mention the fact that he basically trained little Darth Vader, but you get the idea!

Would you still think Ewoks were cute little fluff balls knowing they have a rather carnivorous diet? Stringing folks up in nets and having plenty of food ready on the side doesn’t seem like they were just planning on interrogating our favorite heroes gently… not so fluffy anymore, right? It really makes you wonder – what exactly happened to the Stormtroopers behind those helmets used as an instrument? Just imagine if the Ewoks had also ended up eating our heroes after capturing them!

Where do you start with the saga? Find out how to watch the Star Wars movies in chronological order!

One of the craziest conspiracy theories suggests that Anakin used the Force to trick Padme for nine whole months into thinking she was in love with him. That would explain a lot, because yeah, we also couldn’t understand why such a rational, clever politician as Padme would fall so head over heels for a whiny, impulsive teenager who never hid the fact that he loathed the very regime she represented.

One theory claims he’s a useless Jedi, while another claims the opposite – that Qui Gon Jinn is actually a Sith Lord. After all, he was the pupil of Count Dooku, a Sith Lord, and he also insisted on training Anakin, despite knowing that the boy was filled with anger and pain. All of this has led some fans to believe that he may have always been a baddie who turned to the Dark Side and manipulated Anakin to become Darth Vader. If so, mission accomplished.

11. The Jedi Aren’t Doing their Job

If the Jedi are ever expected to do their job, they’re not exactly living up to it – or so this theory says. Jedi weren’t originally supposed to be the Empire’s intergalactical police, which they pretty much seemed to be for nine movies so far. Originally, they were merely meant to help Force-sensitive folks to stay sane and learn to control the Force, without turning to the Dark Side. Instead, we mostly see the saga’s Jedi protagonists fighting with lightsabers and playing soldiers. But who wants to watch their favorite characters training children for three hours straight? Not us.

R2-D2 and C-3PO played major roles throughout Obi-Wan’s Jedi training, so why didn’t he recognize them when they showed up at this house in A New Hope? Well, this theory says that he absolutely did – as spotted by Reddit user u/sjogerst, Obi-Wan mentions that R2-D2, “should be able to interpret the entire Imperial network” – how can one know so much after having only ‘just met’ the droid? Not to mention that in the canonical novel version of A New Hope, Obi says “It’s good to fly with you again, my old friend” – which would absolutely confirm the theory.

Like Chewie, is R2-D2 also a secret rebel agent? In the prequels, C-3PO had his memory wiped out, but R2-D2 didn’t. Perhaps this is because he’d previously worked with Obi-Wan as a secret agent and needed his memory to carry out future missions. In A New Hope, the friendly droid led the group to Obi-Wan himself – not just because Leia had asked, but because he knew they had to have Obi with them to win the war, as they had before.

14. Yoda Can Slow Down Time

Fans have found inconsistencies in The Empire Strikes Back when it comes to time. It takes as long for Luke to train to become a Jedi as it does for Han and co. to reach Cloud City and get captured. This would only make sense if Yoda was able to slow down time. He is after all, Master of the Force – to fix this jarring plot hole, fans claim he would have made time drag in order to train Luke.

A Star Wars theory that nearly makes us sympathize with Luke’s father is one that suggests Luke only defeated Darth Vader because the latter let him win. Was Vader overcome by the tiny amount of paternal love he had left for his son? That would explain why Darth Vader, one of the most powerful Jedi, managed to get beaten by Luke who, although he was great at it, had merely started mastering the craft.

Ever since we met Finn in The Force Awakens, we had the slightest feeling that he had been Force-sensitive. In The Rise of Skywalker, just when Rey and Finn are getting sucked into a quicksand-like substance, he yells, “Rey, I never got to tell you—”. Many (naive viewers) assumed he was trying to confess his love for the Jedi, but really, we think he was about to confess his sensitivity to the Force. This theory was later confirmed by Finn, AKA John Boyega himself as well as J.J. Abrams.

The more Episodes added to this movie series, the more reason for fans’ minds to run wild with theories, questions, and conspiracies. Although some sound outright insane, others are somewhat plausible, even to the extent that make you give the entire Star Wars plot a second thought.

What did you think of these theories? If you have some of your own, please do share them in the comments! And as always, may the Force be with you.

Want more from the Galaxy far, far away? Have a scroll through the best Star Wars Easter Eggs spotted throughout the saga – E.T makes a secret cameo!