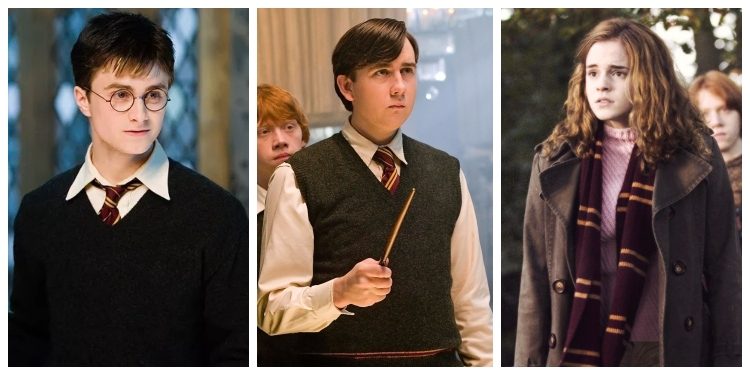 Other than the spin-off saga, Fantastic Beasts, it’s now been almost a decade since the last film of the Harry Potter franchise hit our theatres. In the meantime, the Potter mania has been stronger than ever. If anything, it’s only getting bigger, with the actors still being recognized in the streets and adored by fans all over the world. Since then, the Harry Potter actors have gone on to do amazing things respectively.

So, where are they now?

To catch up with the characters of your favorite saga and find out what they’ve been doing since their Potter-days, here is a comprehensive list summing up what the Harry Potter cast is up to now.

Starting, obviously, with the beloved trio.

Although he hasn’t played in any new blockbuster franchise since the end of the saga, Daniel has certainly kept very busy, and his choice of movies have been quite varied and often intense. Since 2011, Daniel has played in numerous dramas such as the horror film, The Woman in Black, the indie fantasy, Horns, and the critically acclaimed Swiss Army Man and Imperium. He recently had roles in Miracle Workers and Guns Akimbo.

In his downtime, Daniel also works for the stage, writes poetry, and does charity-work…oh and he’s become quite the handsome chap, too! The actor has been dating actress Erin Darke since 2013.

Emma Watson didn’t let the end of the beloved franchise stop her from spreading her wings. Since then, she’s played a wide range of roles, from a West Coast spoiled brat in Bling Ring, to a quirky teenage misfit in The Perks of Being a Wallflower. More recently, the stunning actress was fittingly chosen to play Belle in the live-action adaptation of Beauty and the Beast and the upcoming remake of Little Women.

Not only that, but Emma has also earned a Bachelor’s degree in English at Brown University, while notoriously becoming an outspoken gender equality activist, creating the campaign #HeForShe, and becoming a Goodwill UN ambassador. A real-life Hermione! Only a change in hairstyles might separate her from her Harry Potter counterpart.

Rupert might have been the most discreet of the famous trio, but he’s kept just as busy himself. The charming young actor has played in various indie films this past decade, such as the World War II movie, Into The White and Macbeth adaptation, Enemy of Man. He recently appeared in the BBC One adaptation of Agatha Christie’s The ABC Murders and the TV series, Snatch.

Since shelving the role of the adorable and clumsy Ron Weasley, Rupert has also made waves in both the West End and Broadway, staring in many acclaimed plays. Rupert has also been in a relationship with English actress, Georgia Groome since 2011.

Not only is Tom Felton becoming a Hollywood heartthrob by the day, he’s also been one of the busiest members of the cast. A musician in his downtime with several EPs released for the pleasure of his fans, he has also played the role of more villains in films such as The Apparition, Rise of the Planet of the Apes, and the period drama, Belle.

He also starred in the TNT series, Murder in the First in 2014, and has notably produced and directed a documentary on Harry Potter fans called Tom Felton Meets the Superfan. In late 2018, he appeared in a YouTube Red original series called Origin. Several years, and longer locks later (oh and facial hair), Tom Felton is looking a lot different and kinder than Draco Malfoy!

Since the end of Harry Potter, Matthew Lewis went on to perform in various plays and has even gotten married to Angela Jones. Although he hasn’t appeared on the big screen for a while, it seems he might return soon in an upcoming movie alongside none other than Simon Pegg and Margot Robbie. He has featured in the BBC Three comedy, Bluestone 42, had a guest role on the British series, Ripper Street, and played a small role in the romantic comedy, Me Before You, however.

Matthew has also made quite the buzz in recent years after showing off his transformation and looking far a cry from the adorably awkward and clumsy Neville he once was. I mean, this then and now picture is mind-blowing!

Neville has been ranked as one of the best Harry Potter characters! See who else made the list!

The beautiful Bonnie Wright, who played Ron Weasley’s clever only sister and Harry’s final love interest and eventual wife, has been acting in a few discreet movies since the end of the franchise. Other than modelling during London Fashion Week, Bonnie completed her bachelor’s degree from the University of the Arts: London College of Communication in 2012 and has been looking for a role as a film and television production manager.

She’s mostly been focusing on directing and screenwriting, and notably wrote the screenplay for a short film starring David Thewlis aka Remus Lupin. Those gorgeous red locks are still in sight, too!

The regretted actor was already a household name before Harry Potter, with landmark roles in Die Hard, Love Actually and Robin Hood Prince of Thieves. After the last Harry Potter film, he went on to play more roles in acclaimed plays both in the West End and on Broadway. In 2013, he played alongside Rupert Grint again as a punk club founder in the film CBGB.

The legendary British actor unfortunately passed away from pancreatic cancer in January 2016, at the age of 69.

The identical redheads went back to their natural brunette hair immediately at the end of the franchise, but they still played brothers in an episode of British series, Kingdom in 2012. In 2015, James starred in an independent thriller titled Patchwork and Oliver played in another independent film titled Felo De Se in 2016. They have also had several stage roles whilst staying very active with Harry Potter fans, participating in conferences and meetups around the world.

The twins are also huge supporters of charity work such as the Teenage Cancer Trust and participate in a lot of fundraising sportive events. They’re looking pretty grown up these days!

The actress who played the aloof and caring Ravenclaw student has had a busy life since the end of the franchise. Evanna has had roles in British TV shows, on stage, and in several independent films along the years. Most recently, she was a contestant in season 27 of ABC’s Dancing with the Stars, in which she and her partner finished in third place.

Evanna has also been an inspiring and outspoken activist for body positivity in young girls, since she herself battled anorexia as a teen.

Like most mature actors of the franchise, the actress who played Harry’s wicked aunt Petunia already had a long and fructuous career behind her before landing a role in the wizarding films. After the latter, she had a recurring role in the TV show, True Blood for twelve episodes, and more recently, she has made waves in the recurring role of an MI6 operative, Carolyn Martens in the acclaimed BBC America series, Killing Eve.

In fact, she won the 2019 BAFTA Award for Best Supporting Actress for that very role!

The actress who played the kind and clever Cho Chang, Harry’s first love interest in The Order of the Phoenix, has had a discreet albeit busy career since the end of the movie saga. In 2017, she played alongside none other than Jackie Chan in The Foreigner, and in 2018, she had a role in Strangers.

Before and after these productions, Kate has had many underrated but acclaimed roles on British TV and on stage. You might not recognize the star these days, as she’s cut her hair a lot shorter- but still looks gorgeous!

The talented actor who played Harry’s bully of a cousin, whom we loved to hate for several years, has also had a pretty busy career. Harry Melling starred in an episode of the beloved British TV series, Merlin in 2010, the short-lived BBC series, Just William, as well as in an episode of The Musketeers in 2016. Both during and after the franchise, he also appeared in several plays and more recently starred in the Cohen brothers’ Western The Ballad of Buster Scruggs alongside Liam Neeson. His most recent work was in the 2019’s mini-series, The War of the Worlds.

This before and after photo might surprise you – Harry is a lot slimmer since his Dudley days!

The cast of Harry Potter today are regularly busying our TV screens, but not as much as this particular character! Alfred Enoch is one of the surprising success stories of this cast since he played a minor character in the franchise and has yet gone on to become How To Get Away With Murder’s famous heartthrob, Wes Gibbins.

He has also kept a consistent workload on British TV and on stage, notably in Broadchurch and Sherlock. Most recently, he played Aeneas in the 2018 TV miniseries, Troy: Fall of a City.

A mostly unknown actor when he played the tragic role of Cedric Diggory in The Goblet of Fire, Robert Pattinson has become an international star with his role of Edward Cullen in Twilight. Although he famously did not enjoy the role — or the films as much as the fans, the actor is thankful for how it helped his career. Since shelving his vampire fangs, Robert has gone on to play in several riveting productions such as Cosmopolis in 2012 and Good Time.

Robert’s relationships have also been the talk of the town, after dating former co-star, Kristen Stewart and getting engaged to FKA Twigs. Other than starring in 2019’s The King, the actor released a song called Willow, and it was announced that the actor would be playing the Dark Knight in 2021’s The Batman – possibly set to be Robert’s biggest performance to date.

Maggie Smith was an acclaimed actress before she first appeared in the role of the sharp but ultimately good-hearted Professor McGonagall in 2001. She has played in the franchise consistently during its run but this didn’t stop her from playing other roles between each wizarding shoot, such as the British dramas, Ladies in Lavender and Becoming Jane, among many other on-screen and on-stage projects.

Since the end of Potter, she played yet another iconic role as the cunning and witty Dowager Countess Violet Crawley on the award-winning Downton Abbey from 2010 to 2015. In February 2019, it was announced that the actress would return to the London stage for the first time in twelve years in A German Life.

After warming our hearts for a decade, the stars of the Harry Potter world have now gone on to do a variety of interesting and inspiring things. The cast are all grown up, playing on-screen as well as on-stage, doing charity work and raising awareness for important causes – quite magical in its own right if you ask us!