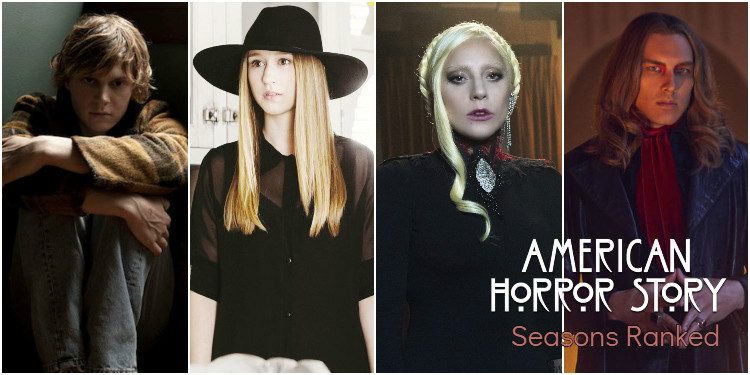 When you’re a horror fan, you get used to the idea that there’s nothing new under the sun. Movies and TV series always fall into a horror film trope—like “the group splits up” or “the virgin survives.”

Audiences tire of cliché after cliché. They crave new. They crave good. They want to be thrilled by intense visuals, genuine creepiness, and a story that makes them feel like they need to buckle up and hold on till their knuckles turn white. This is what American Horror Story attempts to do, with varying degrees of success, series to series.

From seasons one to nine, we nail down the best AHS season and one that’s bound to scare you the most. Here’s a list of all the American Horror Story seasons ranked from worst to best…

A nightmare collage of grand themes in a possible attempt to be the next Masque of the Red Death. Disturbing and paranormal scenarios of all kinds at the Hotel Cortez, campy vampire fashionista included—all for the low, low price of a terrible interwoven plot. A resourceful detective is sucked into the black hole trope that even the gods can’t escape due to the addition of a biblical-themed “Ten Commandments Killer” and the “Addiction Demon.”

Why it’s the Worst

Over-reaching is a pitfall for writers who are trying to cram too much story into a single series, and this is exactly what happened to this poor season. Fans of the show tend to agree with this ranking of Hotel, and that its reach exceeded its grasp but not in a motivational way.

No amount of star power could save a bad story. Putting Lady Gaga into the series may have been some delusional attempt to make a bad story good, but the writing winds up being complexity for the sake of complexity rather than for an entertaining show. It’s safe to say Hotel is the worst season of American Horror Story thus far.

What is happening? It’s the end of the world as we know it, but not a single person feels fine. Maybe. This season is such a mess, a synopsis is difficult to pin down. But to sum it up, the antichrist is Michael Langdon from Murder House (season one), time flips to show the new world/future, and there are more ins and outs than a brothel on a Saturday night.

Remember what we said about complexity for the sake of complexity rather than a good story? That fits this season perfectly. Confusing, boring and simply pointless is pretty much what sums up Apocalypse.

Additionally, the final battle between Michael and Mallory has to be one of the most anti-climactic let-downs in television history. The only saving grace that kept Apocalypse from the bottom of the barrel is that as soon as you’re tired of everyone, they all die.

Get your hands on some of the greatest (and creepiest) American Horror Story gifts for yourself or a friend!

Jupiter, Florida. 1952. Differently abled-people outcast from society gather in one of the last remaining Freak Shows in the United States under the reigning terror of ringleader, Elsa Mars. Essentially, this season is a poor-man’s tribute to the 1932 classic film, Freaks.

Why it’s in 7th Place

Actors, amazing as they are, cannot carry this season alone (well, maybe Jessica Lange). While the first few episodes of Freak Show are eye-catching and interesting, the story begins to drag and fizzle out. The second a story begins to glorify itself with a self-congratulatory musical revue, all hope is lost, leaving the viewers to scratch their heads and cry for a lost plot.

The fact that it started out strong is why it’s not quite the worst American Horror Story season, but it has enough demerits to warrant the near-bottom of the pile. It’s a shame, too—because the way society treats the differently abled and those who just don’t “fit in” is deserving of a damn good story.

A reality show focusing on a couple who moves to Roanoke, experiencing lovely phenomenon in the forms of dead nurses, evil haunted woods, an evil spirit—fun times—at least for the first half of the season. The rest of the season moves on to the real people and actors who portrayed them going back to the house after the production company closes down the reality show. The actors and real people return to film their experiences. Creepiness ensues.

Why it’s in 6th Place

Roanoke isn’t the worst, and the writers give it their all with a snazzy plot twist halfway through the season. That deserves a bit of merit. Additionally, fans tend to agree that there are spine-chilling moments that make it worth watching.

The downside is that pitfall of hasty writing—plot holes and dropped plotlines abound, which is why it hits the mid-tables of mediocrity. With an improved story, Roanoke had the potential of being the scariest AHS season.

A killer clown cult indoctrinates a Michigan town into its evil snare, no supernatural themes required. There’s a ton of themes in this season—from multiple phobias with psychosis to LGBT rights and how people cope with a culture of fear and fear mongering. Cult centers around politics and is all about how ugly human beings can be when they go to extremes—the proverbial “dark side” of the human condition.

Why it’s at 5th Place

There is merit in looking at the horror of the human psyche, and this season captures exactly zero paranormal themes, focusing solely on the horrific crimes of cult leaders.

However, Cult relies too heavily on tropes and turns fans off who are in it for the paranormal surreal or prefer straight up scary entertainment as opposed to being smacked in the head with realistic, everyday themes.

Did you know that each season is intertwined? Find out how every American Horror Story season is connected in our post!

80’s nostalgia, stabbings, and a camp-site full of rampant, murderous ghosts is pretty much what sums up season 9 of AHS. Reminiscent of classic slasher movies from the 80’s, 1984 centers around Camp Redwood, a summer location known for its brutal and bloody past where a certain Mr Jingles once slaughtered numerous campers. With new teens now exploring the area, things take a gory and gruesome turn – buckle up, expect a few twists and erm, a killer 80’s soundtrack.

Why it’s in 4th Place

A decent season, with plenty of blood, gore, and 80’s nostalgia pulling viewers in. 1984 had great storytelling and a brilliant cast, although our favorite leads (e.g. Sarah Paulson, Kathy Bates) were MIA. It’s safe to say however, that the cast, both new and returning were impressive enough – Finn Wittrock, you rock (even though you only cameoed in one episode)!

Those in favor of cheesy and campy fun, as well as awesome hits from that very era would have loved this season. It was pleasing to have a happy ending for once, too!

New Orleans, 2013. Voodoo. Delphine Lalaurie and Marie Laveau. A coven of witches fighting for survival. Historical flashbacks to the Salem Witch Trials, the fictional demise of Lalaurie, and the rise of a new coven leader as the elder leader fades.

Why it’s in 3rd Place

Mixing reality with fantasy can make for an interesting story, and Laveau’s influence on New Orleans and Voodoo culture is big enough to deserve a spot in legend. The writers masterfully give the audience what we crave, too, when Delphine Lalaurie gets buried alive (in reality, she escaped the mob justice she so richly deserved) for her atrocious torture of her slaves.

However, Coven is not the best season and can’t quite be ranked at first place due to a few follies. Inaccurately portraying Papa Legba is a letdown, and the inclusion of Stevie Nicks to try to support a rotting plotline of Misty Day (portrayed by Lily Rabe) falls through in spectacular fashion. As much as we love Stevie Nicks and Lily Rabe, Coven has a disappointing plot that fizzles right out.

At fictional Briarcliff Manor, a Catholic mental institution, stories unfold of patients and staff as accused killer Kit Walker arrives. Includes a brilliant sub-plot of a Nazi doctor experimenting on patients, and an innocent nun who catches his eye—only later, the nun succumbs to demonic possession.

The writing and plots are tight, giving care to wrap things up, so there are no dangling storylines or plot holes. The only reason Asylum isn’t ranked at first place is that there are some pacing issues that either slow the story too much or speed it up unnecessarily.

The writers do an excellent job, however, of weaving supernatural elements into the harsh reality of mental asylums which makes for a fun and interesting bend to perceptions. This season is a successful nod to magical realism.

After catching her husband having an extramarital affair, Vivien Harmon, her husband Ben, and daughter Violet attempt to pick up the pieces of their dysfunctional family by moving to the infamous Murder House, built by Doctor Charles Montgomery—a doctor driven to perform illegal abortions to support his family.

Why it’s the Best

Murder House is officially ranked as the best American Horror Story season. This is an instant classic that takes archetypes and tropes and twists them, interweaving brilliant subplots. There are scary and jumpy moments as well as themes that keep people talking to this day. Though there are tropes throughout the season, they are purposeful tropes that drive the story along. Additionally, the characters—both men and women—are well-rounded and engaging (whether we hate them or love them).

On top of all of that, the special effects in Murder House don’t strive to go over-the-top. Instead, they focus on interweaving a brilliant and genuinely scary story with multiple, intersecting plot lines. It seems that the lower the budget, the harder the writers work to make the story worth watching.

Writers with small budgets work hard to bring great stories to both television and the silver screen, but the more success they enjoy and the bigger the budgets grow, the lazier and sloppier the stories get. We see this played out in the nine seasons of American Horror Story, proving that huge stars, fine actors, and beautiful visuals cannot substitute the meat-and-potatoes of an engaging plot and story.

Want more from the world of AHS? Check out these real life events that inspired the show!

Anne Hogue-Boucher is a horror writer and former supervised therapist. She is the author of Exit 1042, Now Entering Silver Hollow, and Mercy Hospital. You can follow her around on Facebook, ask her anything on Quora and purchase her works on Amazon.