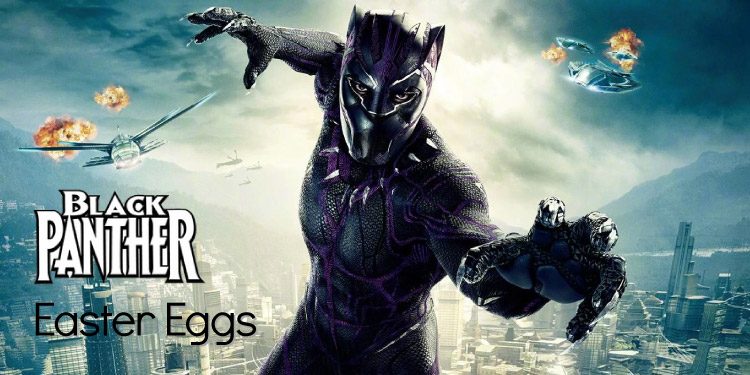 With every film that goes by, Marvel seems to be getting even better at hiding secret nods, references and shout-outs to its Cinematic Universe in plain sight. No surprise then that there are no shortage of little secrets in the franchise’s most successful movie. Like the explorers of old, we brave the jungle in search of Black Panther Easter Eggs. Because this is a nation of secrets, we kept our eyes extra-keen for this one…

It wouldn’t be a Marvel Film without our man Stan, would it? As expected, he makes his 33rd Marvel movie cameo in Black Panther. After T’Challa placed a random bet and won everything on a Roulette table, Stan leans over and assures that he’ll “keep the money warm.” Don’t lose it all on a good streak, Stan. It’s your night!

2. Another White Boy To Fix

This gets revealed further in the stinger but when Everett Ross is brought to Shuri’s labs, her reaction to fixing him up is to call him “another broken white boy for me to fix.” This is clearly a secret joke about Bucky being dropped on her doorstep at the end of Civil War.

The Hatut Zeraze, Wakanda’s covert ops/secret police force is yet another Easter Egg we were proud to catch. You may recall that “War Dogs” was the moniker for royal spies and the agents that Killmonger planned to equip with vibranium weapons in order to begin his campaign. This is another name for the “Hatut Zeraze”. The War Dogs have also been mercenaries under the employ of Roxxon Energy.

The name “White Wolf” given to Bucky in one of the post-credit scenes is another “Hatut Zeraze” reference, this time to their leader. “White Wolf” is the code-name for a man who was adopted by T’Chaka. His identity is a huge mystery, but he’s not Wakandan as like Bucky, he was named after his complexion.

Fans of Black Panther would be extremely familiar with the giant of a man in a gorilla mask that was M’Baku. This guy is more familiarly known as Man-Ape, one of T’Challa’s greater opponents and challenged the Panther King over cultural disagreement like he did in the film. He’s not dead, he’s popular, and he still has beef with the king’s agenda so maybe he returns one day?

No foreign-enough-sounding gibberish here. To hit that African authenticity, characters spoke real African dialects. Wakandans speak Xhosa, where most speakers can be found in Zimbabwe and South Africa while the J’Bari speak the tongue of the Igbo from Southwestern Nigeria.

Among the predecessors that greet T’Challa when he visits the Realm of the Ancestors are three somewhat famous names in the comic legends – Azzuri, Negus and Chandra. They don’t speak, they stand and observe. While it’s hard to tell, they may have also dwelled in the tee when we first enter the realm.

8. Mask of the Killmonger

Why yes Erik, you certainly did get a feeling from that Igbo mask you stole from the British Museum. You wear something a lot like it in the comics. Maybe without the horns though.

9. Killmonger Really did Throw Panther off a Cliff

Much like Tony Stark’s explosive exit out of a cave, Black Panther’s early adventures are indicated in his own film. The scene where Killmonger tosses T’Challa over a cliff is a direct parallel to the famous scene from the 1971 reinvention story ”Panther’s Rage,” where Killmonger is introduced.

M’Baku’s joke that their tribe are vegetarians is a twisty one. The more prominent hint is that in the comics, Man-Ape is something of a carnivore, having gained his powers by eating a white gorilla. The second is that real gorillas mainly eat fruit, leaves and seeds. It’s a relief for our heroes but they must have done something with the meat that came with those fur collars and hanging bones, right?

Comic fans would be overjoyed to see Ulysses Klaue unveil a rather literal hand cannon. This is a classic element of Klaue/Klaw’s design, though Ulysses more classically used a sonic blaster (complete with radar dish like emitter) rather than a re-purposed mining laser.

We’ve said it before and we’ll say it again – Marvel loves honoring Star Wars, particularly that infamous scene where Luke Skywalker loses a hand. As in most MCU movies, a character yet again has his arm cut off in tribute to the iconic Star Wars character, this time being Klaue (again).

13. Back to the Future Footwear

Who knew Marty McFly inspired the likes of Shuri? When T’Challa’s sister shows her brother a new pair of sneakers, she hints that she got the idea from “an old movie” that T’Chaka loved watching – AKA Back to the Future. Shuri didn’t just come up with the self-assembling shoes out of nowhere. Casting no doubt that daddy Panther was a Marty McFly fan.

We bet no one expected a Vine joke to appear in the movie, but here we are. When Shuri spots T’Challa showing off his royal sandals, she repeats the 2015 Vine trend as a reaction. Although her reaction might be less out of awe and more out of shock as to just what exactly her brother is wearing. We totes agree – what were those?! With a bank account that huge and rightfully considered one of the richest Marvel heroes, we’re sure T’Challa can get a better pair of shoes than those!

When the new dissolving panther suits are being revealed, our new king gets a choice of two necklaces where the technology is stored. He looks over but ultimately dismisses the large gold necklace. He scoffed at the elaboration of it but he wore something very much like it for a while. Instead, it’s worn by Erik as a little nod to Black Panther’s comic book costume.

Another callback to the story “Panther’s Rage” is Panther’s wrestling match with a rhino, right down to the position in which he brings it down with a headlock. Luckily for the rhino and animal fans everywhere, it was only immobilized here.

Oakland, California has quite a history that links with this film. Oakland was where the real-life Black Panther party emerged in 1966. But more importantly, not only is Oakland the hometown of director Ryan Coogler, it links to Michael B. Jordan’s star role in Coogler’s 2013 breakout Fruitvale Station; a biographical story on the last day of Oscar Grant III who in 2009, was shot dead at an Oakland station.

This line, said by T’Challa to a beaten and armless Ulysses Klaue, comes ad verbatim from the New Avengers #22 just before Namor the Sub-Mariner and an angry Panther engage in a brawl after Thanos arrives with his army, the Black Order. Could this be a tease for Infinity War?

Indeed, there are Easter Eggs in this movie that link to other films in the Marvel timeline including Doctor Strange. The armies ready to attack have a rather peculiar pattern. While New York and London certainly have their distrusted minorities, Hong Kong is more confusing unless Killmonger counts Indonesians or Filipinos as his fellow brothers as the city is overwhelmingly Chinese. What does link the three cities together are the sanctums of the Sorcerers, which we saw in Doctor Strange.

20. Mountain of the First King

When the vibranium meteorite crashed into Africa it caused a significant geographical transformation. Locals around the region came to recognize it as Mount Bashenga, which they named after the king who united all the tribes. We see this mountain prominently as this is where Shuri set up her workshop.

Ryan Coogler was very grateful to Moonlight director Barry Jenkins, who provided a supporting voice during production. As thanks, the last line of the film was given to Alex R. Hibbert, who played the child phase of the life of Moonlight protagonist, Chiron Harris.

22. A Leapord and its Spots

If you look really closely, you might have noticed that the gold panther suit worn by Killmonger at the climax, sported a patchy leopard-skin pattern. This is a likely nod to the time Panther was called Black Leopard, to distance the character from the party. It also might be a wink to Killmonger’s pet leopard and sidekick Preyy.

Many would have noticed the visual similarities between Black Panther and Lion King. Remember when T’Challa travels back to the ancestral plane after becoming the Black Panther? Well, that scenery looked a lot like Rafiki’s ancient tree in the Disney classic. The comparison photo below reveals just how many secret Lion King references there were in the Marvel movie.

Pay more attention to the casino scene and you’ll notice T’Challa, Okoye, and Nakia are wearing the colors of the Pan-African flag – red, black and green. #Mindblowing

We’ve hunted as hard as we could but who knows, maybe another explorer noticed something that we did not? Let us know in the comments.

If you’re that much of a T’Challa fan, why not deck yourself out in some Black Panther clothing? You’re bound to find something in our selection of Marvel tops!

Mark Stamp has a head for writing, whether it is short stories, logs, journals or the latest news. When not deep in exploring a new tale or world he is often on the lookout for the latest movie, video game and television news on Facebook, Twitter and among a dozen other journalists. What beings him back to the narratives are often the deeper or hidden philosophies in great works, niche publications and new releases. On social networks, Mark can be found sharing discoveries, answering queries or pondering an implication or two.