Millie Bobby Brown is by far one the most praised child actors gracing our television screens at the moment. Jumping from relative anonymity to immediate stardom, the young star has stolen all of our hearts ever since landing a role on the hit TV show, Stranger Things. The stellar job she’s done as Eleven has blown everyone’s mind. Heck, they’ve even dedicated a few memes to her, but unbeknownst to some, the person behind one of the best Stranger Things characters is nearly as fascinating, if not more!

Here are 12 Millie Bobby Brown facts that you probably didn’t know, and which will undeniably make you love her even more…

As mentioned in our Stranger Things facts post, unlike Eleven, Millie is actually British, born in  Marbella, Spain, to British parents. Turns out, she had to fake an American accent to play Eleven on Stranger Things. A bonus fact – the reason her accent is so good is because she used to practice it by watching many Disney Channel shows in her down time.

2. ​Millie is a Great Singer…and Rapper!

Millie can actually rap, which she demonstrated on Jimmy Fallon’s Tonight Show and during many interviews. She can also sing, which was her first dream, and she shows it often on social media for everyone’s pleasure! Check her out rapping Nicki Minaj’s Monster verse…

Millie has played more roles than just the mysterious girl from Stranger Things! Before becoming the phenomenon she is today, she had several acting gigs including an episode of Grey’s Anatomy, NCIS, Modern Family, and BBC America’s Intruders. 4. ​Millie had no Idea she Had to Shave her Head

In an interview with W magazine, Millie revealed that she had no idea she would have to adopt a buzz cut before she auditioned for the role of Eleven. Once she got the part, she bravely accepted to shave it all off. Her mother was far more upset than her about it, but Millie remained calm and did what ought to be done. She knew her hair would grow back anyway and was ready to do anything for the role. Talk about dedication!

5. ​She Texts Ariana Grande and is BFFs with the Kardashians

If you follow Millie on Instagram and Twitter, you’d have seen her regular conversations with stars like Ariana Grande and the Kardashians. In fact, she has Ariana’s telephone number who regularly gives her fashion advice (jealous, much?). Millie also tweets the Kardashians and they tweet her back!

Stranger Things has several Easter Eggs referring to popular 80’s movies. To explore her role, Millie watched many movies from that era and familiarized herself with general 80’s memorabilia. She immersed herself in the decade so much, that when asked about it, she revealed that she would have loved to live in that era. Us, too! If you love Millie that much, get your hands on a Stranger Things t-shirt dedicated solely to her!

She isn’t just a phenomenal actress, singer and rapper. Millie is an avid boxer, too. She loves to unwind by boxing and posts regular videos of her training session on her social media, making us all feel incredibly self-conscious about how little we go to the gym. ​The kiss Eleven exchanges with Mike in Season 1 of Stranger Things wasn’t only the character’s first kiss, but Millie’s, too! She revealed in many interviews that she was incredibly embarrassed about it and did not find it much to her taste. In her own words “Kissing sucks!”

As the two main women on the show, it’s not surprising that these ladies bonded rapidly. Winona herself was a child star and it’s easy to imagine she might give Millie advice on how to navigate such a job and the difficulties of fame. It’s no surprise that child stars who went through fame so fast and so young would become friends. Millie and ​Sia’s backing dancer, Maddie Ziegler are best friends and share a lot of their friendship on social media. Before meeting Maddie backstage of ​So You Think You Can Dance, Millie was already a huge fan of hers​.

11. She’s One of the Youngest Stars to be Nominated for an Emmy

In 2017, Millie was nominated for Outstanding Supporting Actress in a Drama Series at the Primetime Emmy Awards. She didn’t win but she got the honor of making history as the youngest Emmy nomination ever. She did however win the award for Best Actor in a Show at last year’s MTV Movie & TV Awards.

12. Millie is Already a Fashion Icon

The young starlet is already making her mark in the fashion world. Millie has been the face of Calvin Klein and most recently, she teamed up with noneother than Converse! 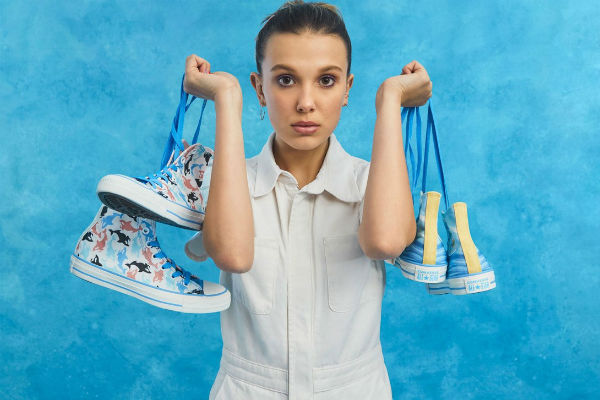 As you can see, just like her character, there is nothing little Millie can’t do and there’s plenty to like about her! At only 15 years-old with a net worth of over $4 million, the immensely talented child actress hit the spotlight like few stars have ever done before. There’s no doubt her IMDb page will keep on growing for the better. We can’t wait to see more from you, Millie!