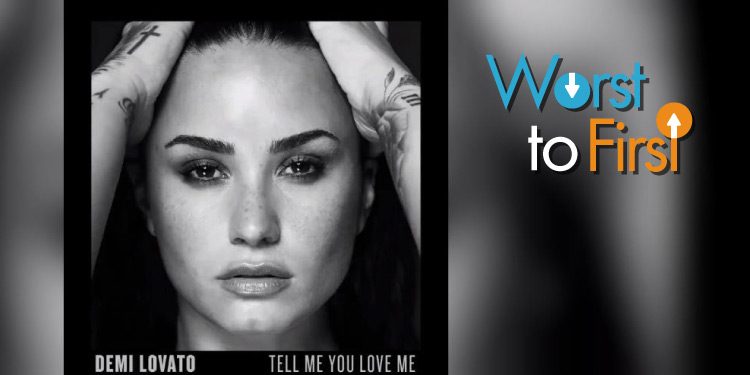 Demi Lovato has dropped her latest record, Tell Me You Love Me which is jam-packed with poptastic hits, raw, emotional ballads and dancefloor bangers. The former Disney star showcases her trademark powerhouse vocals, wears her heart on her sleeve and delivers a bunch of sexy vibes on her sixth studio album. So, which track is worth listening to? Is there a song that just doesn’t cut it?

Demi is stripped-back in Concentrate, the least-impressive song on the album. Compared to its preceding tracks, the sensual jam is hardly an immediate standout. The soulful number is listenable, but sadly, forgettable. Onto the next one…

Oh wait, am I listening to the same song again? Nope, Hitchhiker just sounds exactly like Concentrate which is why it’s been ranked as one of the least best tracks. The song has a chill vibe, and it’s destined to be liked by many but it just doesn’t cut it like Demi’s other hits.

The mid-tempo ballad which sounds like it was made for Ariana Grande showcases Demi’s vulnerability but it’s just too moody to be liked. Lil Wayne’s verse is draining and unnecessary and Demi’s f-bombs are a bit cringe-worthy. Fast-forward.

Demi’s larger-than-life vocals dominate her sixth-studio album, but listeners are given some breathing space half-way through with Only Forever. It’s flirty and hypnotizing but it ends up being somewhat of a humdrum. We’ll give it a chance, Only Forever could be a grower.

Again, Demi shows-off a softer side to her voice in Ruin the Friendship, a sexually empowering jam that hears the singer make suggestive comments to her “friend”. Demi sounds sexy and the smooth trumpet instrumentals are even sexier.

Let’s take it all the way back to R&B from the 00’s. Games is serving those old-school vibes. The track’s slick production and Demi’s powerhouse vocals has drawn me right in. The popstar stands her ground and picks up the pace after a string of low-tempo ballads.

From an Adele song to an Ed Sheeran hit, listen to Demi’s best covers.

Who needs Justin Timberlake when you’ve got Demi Lovato? Sexy Dirty Love sounds like a fun and infectious hit pulled straight out of JT’s FutureSex/LoveSounds. The track is a total bop that gives us 70’s vibes. Demi can clearly sing almost any kind of song.

It’s funny because this song totally does it for me! Demi gives the album’s ultimate break-up song her absolute all, wowing us all with her vocal acrobatics. In fact, this is more than just a break-up song. Demi wears her heart on her sleeves, telling us that her previous addiction to drugs and alcohol just don’t do it for her anymore. Go girl!

Cry Baby is a hit-and-a-half. Demi’s vocals take center-stage in the track that’s bound to be a radio-favorite. You can almost hear the singer’s voice breaking as she delivers a raw emotionally-powerful performance. This one’s a favorite.

Demi touches upon her “daddy issues” which stem from her relationship with her late father, Patrick. The lyrics are honest and the beat is fun and addictive. Daddy Issues showcases Demi’s talent as a true popstar. Where’s the repeat button?

The album’s title track almost landed at the top spot, almost. Tell Me You Love Me has been ranked as the second-best song on the album. Demi once again reveals her vulnerability in the soulful song and delivers powerhouse vocals that very few superstars these days can achieve. It’s a raw pop ballad that’s going to have a lot of Lovatics singing their hearts out.

You guessed it, Tell Me You Love Me’s lead single has landed the number one spot in my ranking. The powerful, sassy and badass track is undoubtedly the best song on the album. Middle finger up to her haters, Demi is confident and in control throughout the empowering song. Sorry Not Sorry has got an eternal spot on my playlist. Nice job, Demi!

What’s your best and worst song on Tell Me You Love Me? Let me know in the comments below!