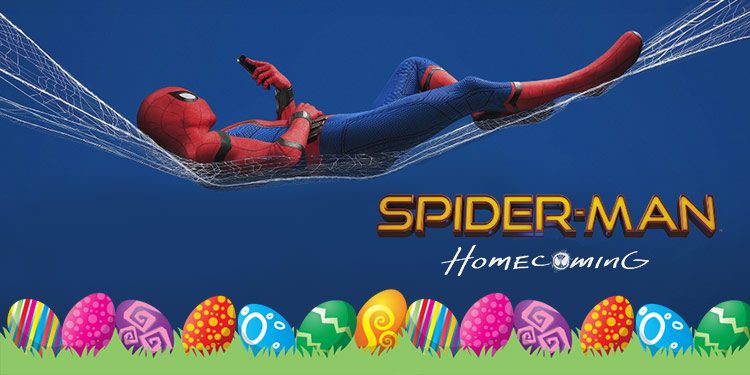 The third times a charm, and it came in the form of Tom Holland, the latest actor to don the red and blue, Spider-Man suit. Starring alongside Michael Keaton, Jon Favreau, Zendaya, and Robert Downey Jr., the Marvel cast creates a fun and fan-appeasing Spider-Man film with a very different web-crawler from both Toby McGuire’s or Andrew Garfield’s. Comic book and movie-lovers alike had great things to say about the summer flick, but like any moviegoer, there are some Marvel references, jokes, and Spider-Man nods you may have missed.

Beware, there will be spoilers, so if you haven’t seen the movie already, first, what the heck? And second, go catch the next showtime and return to check out these Spider-Man: Homecoming Easter eggs…

The Marvel opening credits are notorious for filling audiences with anticipation and excitement for the flick to come. Not only did Marvel succeed yet again, but by adding the famous Spider-Man theme song, originally from the 1967 animated series, audiences were ready to see their fan dreams come true with the catchy tune that’s hard not to sing along to. Here comes the Spider-Man!

Not only do audiences get introduced to a live-action Peter Parker like never before, but Peter’s classmates play a much larger role in the 2017 film than ever before. Ned Leeds, Liz Allan, and Flash Thompson are some of the new and diverse faces that we see, and their roles are much more relevant than in previous adaptions. Ned finds out about Peter early on, giving way to the casual humor of Jacob Batalon as well as contributing to the light and fun tone, which is a divergence from the usual solemn Peter Parker from previous adaptions. Liz is a love interest from the comics while Flash is less of a dumb jock who bullies Peter and more of a smart, DJ…well bully. Some things never change.

Another new face we see is not new at all, but Mary Jane, the notorious love interest of Peter Parker in the comics, cartoons, and live-action films. Zendaya plays the famous part, but it is not revealed until the films end, inciting some hinting at what is to come, but also promising that this will be a new MJ from the one fans are familiar with.

Star Wars and Marvel are connected in more ways than you think! Did you spot the several toys and action figures from the franchise in Peter’s bedroom? That’s not all. You may recall seeing Ned holding a LEGO Death Star model. John Bishop spotted more examples, too! Awesome!

The seemingly unimportant weapons buyer on the Staten Island Ferry makes a return in this MCU after-credits scene, donning a scorpion tattoo, an obvious hint at the possible future villain, Scorpion. We have a feeling this won’t be the last we’ll see of him.

Stan Lee’s cameos in the Marvel Cinematic Universe are always a laugh. He’s played a FedEx mailman, a barber and a barman, too. Stan Lee has yet another brand new role in the Marvel Universe, this time as Gary, New York resident who watches as Spider-Man attempts to stop a car thief. “Don’t make me come down there,” he yells at Spidey.

Donald Glover’s character Aaron Davis not only helps push the movie’s plot along, but also references the comic book character who eventually becomes the robber, Prowler. This explains why the character is so interested in The Shocker’s climbing equipment.

The casting is also a nod to the viral social media campaign to get Donald Glover to play Spider-Man, the role that eventually went to Andrew Garfield. Aaron Davis’s role may have been a hint at something bigger to come, so hopefully, this isn’t the last we’ll see of Donald Glover in the Spider-Man series.

Spider-Man: Homecoming introduces another character, Karen, the voice in Spidey’s mask. Not only do audiences get to hear the light and beautiful voice of Jennifer Connelly being witty to the hero, but she is also the real life wife of Paul Bettany, the voice of J.A.R.V.I.S and Vision. Small world, you say? Or an intentional Easter egg?

Want to discover more hidden references and nods? Check out the top 10 best Easter Eggs in ‘Far From Home‘!

If you thought Principal Morita looked familiar, you weren’t mistaken. Marvel double-casted Kenneth Choi, who also played in Captain America: The First Avenger. In Spider-Man, Choi plays his own grandson, the principal of Peter’s school. Morita even has pictures of his grandfather in his office. The family resemblance is uncanny.

The famous cover of Amazing Spider-Man #33 is tributed in the climaxing scene where Peter Parker must realize that he is stronger than he believes and isn’t helpless without his suit. The epic and dramatic scene showcases Spider-Man pushing himself out of the rubble to go off and fight Vulture.

Sadly, we only got a glimpse of The Iron Spider suit at the end of Spiderman: Homecoming. But it wasn’t just a badass suit used to convince Peter to join the Avengers. It was a nod to the comics, and a possible hint of what’s to come. Introduced in “Amazing Spider-Man #529”, the upgraded suit has even more gadgetry, built by Tony Stark himself. A cool fact about this costume, is that it originally features “three protruding spider legs”. Whether Spider-Man will include those in his future suit is unknown. Too bad Peter decided to just be a “friendly, neighborhood Spider-Man”…for now.

Seemingly just a background…well, tinkerer, the character Phineas Mason is better known in the Spider-Man universe as The Terrible Tinkerer, the well-known creator of villainous weapons and a reoccurring challenge for Spidey.

Here’s a blatant superhero Easter egg! Megingjörð, or “Thor’s Magic Belt,” as Happy calls it in the film, is a nod to the belt that Thor uses to increase his strength in the comics and in Norse mythology. At first, we saw it as a hint for the events in the Thor: Ragnarok. Too bad we didn’t get a glimpse of it.

While playing “f**k, marry, kill” between the Avengers with friends in gym, Peter Parker’s love interest, Liz, reveals that she’s attracted to Spider-Man. This makes her friends point out that she has no clue what he looks like underneath his mask—he may even be covering up severe burns, a nod to Deadpool who’s costume covers up his scars. Lucky for Peter Parker, Liz says she only cares about what’s on the inside.

After saving his fellow decathlon friend’s in DC, Spider-Man has the chance to kiss his beloved Liz while upside down in an elevator shaft, provoking Karen to tell him that this is his chance to kiss her. This is a clear homage to the famous upside down, rain-soaked kiss between Toby McGuire and Kirsten Dunst in the 2002 film. We don’t think anything can top that iconic scene…

Goodhearted, bad guy, Aaron Davis, played by Donald Glover, mentions that he doesn’t want Toome’s weapons in his neighborhood, and agrees to help Spider-Man stop them. Most importantly, he hints that he has a nephew in the neighborhood. In the comics, his nephew is none other than Miles Morales, the boy who suits up as the next Spider-Man in the Ultimate Spider-Man comics. In fact, Donald Glover plays the voice of Miles Morales in The Ultimate Spider-Man cartoon series on Disney XD. Well played…

From Captain America 3 to Guardians of the Galaxy 2, the MCU loves to throw in a few references and winks to other Marvel movies and comic books. Just make sure to keep your eyes peeled when the next blockbuster hits theaters!

Comment below if you noticed any other Spider Man Easter Eggs not listed here, and as always, remember, with great power, comes great responsibility.

Are you a dedicated Spidey fan? Get your hands on some awesome Spider-Man merchandise…

Brianna is an avid writer, chocoholic, and gossip. In her spare time, she can be seen binging on Netflix shows like House of Cards or 30 Rock, or her HBO favorite, Game of Thrones. You can also catch her at the movies drooling over the latest Marvel movie or scrolling through pictures of Dwayne Johnson on Instagram.