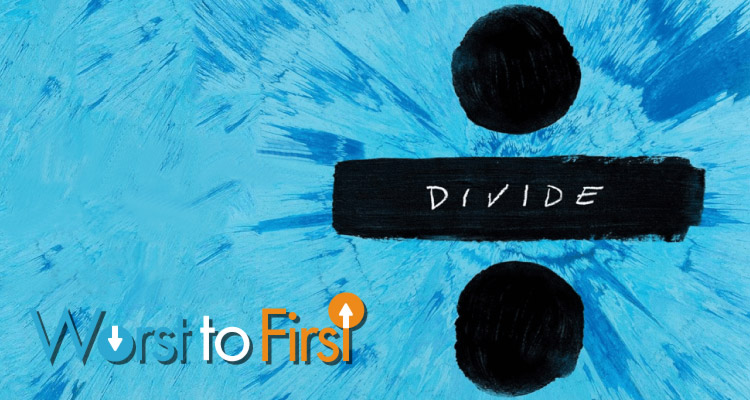 Ed Sheeran has finally released his highly anticipated album, Divide. Kudos to him, he’s delivered an iconic record packed with incredible tracks. While there are familiar guitar-laden ballads, Divide also features songs that hear Ed break out of his comfort zone. Whether you’re into pop, R&B, folk, rock or rap, Ed Sheeran has written a song for you – yes, you!

This album will make you want to cry a river, Irish dance, whine your booty, go to Barcelona, and then cry again – it’s that dimensional and stylized. But which song is best? Here’s a list of Divide songs ranked from worst to first…

It was really tough choosing the “worst” song on the album. Just because we’ve ranked this one as our least favorite, it doesn’t mean it’s a bad track. Hearts Don’t Break Around Here simply doesn’t compare to the other 15 hits on Divide. Ed stays in his comfort zone in this cute, mushy ballad and believe it or not, it’s actually the singer’s favorite song on the album. Isn’t it ironic?

Now that’s how you close an album – on a message of self-acceptance and love. Ed’s no longer getting Drunk folks, he’s learnt to put himself first and truly save himself. Prepare for your heart strings to be pulled throughout this one – Ed’s vocals have a magic way of doing that to you.

Reach over and grab a handkerchief because you’re about to spill some serious tears listening to this number. Supermarket Flowers is a tribute to Ed’s late grandmother and it’s apparently his granddad’s favorite on the album. Pay close attention to Ed’s heartfelt lyrics and just appreciate the raw emotion in his voice – there won’t be a dry eye in the room. RIP Grandma Sheeran…

This is totally going to be the wedding song of 2017! Ed wants Perfect to be the best song of his career and even believes it will beat the success of Thinking Out Loud. The romantic number is beautiful indeed and there’s no doubt it will bless your ears. We have a feeling Ed’s got his fans crying waterfalls right now.

This song is promised to be a favorite among fans. What Do I Know will get you swinging, swaying and hmm-ing along with the redhead heartthrob. With that falsetto, he really can change the world in a moment…

Okay, can we just talk about Happier, or maybe just sob over it instead? This one was so close to being in our top 10 – it’s that good. Happier is another of Ed’s tender moments on Divide, it will make you miss an ex you never even had. Heart-melting lyrics like “I know that there’s others that deserve you, but my darling, I am still in love with you” will mess with your feelings and more!

Castle on the Hill is apparently Ed Sheeran’s dad’s favorite song and we’re not surprised. The U2-inspired track hears Ed passionately sing about his teenage years and belt out his most powerful vocals. The growling, anthemic chorus is enough to make it anyone’s go-to song. Prepare to hear this on the radio – a lot.

Who knew you would be whining your waist to an Ed Sheeran song? Bibia Be Ye Ye is your new favorite festival track, ladies and gents! The upbeat song with its African vibes promises to lift your mood and make you smile. Turn the volume up and get on your feet, this one doesn’t disappoint.

Positioned at the halfway mark is the incredible, Eraser. Ed raps his way through a funky beat and slick guitar sound, proving that he’s more than just a cheesy love-song singer – he’s got swagger! The opening track reminds us of something The Streets would have released, but even better. Eraser really sets the mood for what’s to come on the album – a total masterpiece.

Nancy Mulligan is Ed’s most funnest and experimental work yet. Rejoice Irish listeners – your favorite redhead is channeling his inner-Irish in this jolly folk song. Ed should embrace his Irish side more – this sound totally suits him! Excuse us as we step dance and skip through a field of daises…

Ed has got us bopping once again. After listening to its precedent track, Supermarket Flowers, Barcelona has us dancing with tears in our eyes. It comes as a breath of fresh air following a bunch of brokenhearted ballads. We don’t know about you but this is going to be our summer anthem of the year. Press play and pretend you’re dancing in the streets in Barcelona…

We all know Ed is a pro at producing perfect love songs. One of his best comes in the form of How Would You Feel – a stunning and sincere ballad that’s so beautifully sung. Don’t feel ashamed if this one helps you cry yourself to sleep. It’ll have you wishing Ed dedicated his sweet romantic lyrics to you…

If Thinking Out Loud broke you, prepare to die a little more when listening to this one. The singer spills out his heart for everyone to hear in this emotional moment on Divide. Ed’s broken heart and frustration is heard with every note he sings – at times you can almost hear his vocals breaking. Dive is undeniably the best ballad on the album and it’s going to have a special place in everyone’s heart for a long time to come…

When a song makes you laugh out loud, you know it’s a good one. Not only is New Man lyrically brilliant, it’s groovy and it’s totally relatable. Ed Sheeran goes savage, gets salty and sounds sassy in this masterpiece of a song that hears him describe a douchebag that everyone’s met in their life. We’re totally living for the “he’s got his eyebrows plucked and his asshole bleached” line. Ed’s a lyrical genius, no doubt!

Ed has gone Irish on us once again, folks and we’re not complaining! This time he’s switching up the sound with a touch of R&B. We knew Galway Girl was going to be one of our faves from the first-listen. It’s officially the second best song on Divide. Turn up the volume – the Irish fiddle will have you head-bopping while the catchy chorus will have you singing along. Simply iconic.

Shape Of You is without a doubt, the best song on Ed Sheeran’s newest album. The singer has stepped out of his comfort zone and delivered one of the most sexiest and catchiest songs of the year. Proving that he doesn’t need to stick to mushy love songs in order to impress, Shape of You is a perfect mix of Ed’s signature guitar strumming and skillful songwriting. This is genuinely the most addictive track of all 16 songs, perhaps of Ed’s entire career.

Some of you may have a divided opinion on our album ranking so it would be great to hear your thoughts. What would you say is the best and worst song on Ed Sheeran’s third studio album? Let us know in the comments below…

Want more from the world of Ed? Our writers have also ranked every track on Ed Sheeran’s latest album, No.6 Collaborations Project!

Whether you're into pop, R&B, folk, rock or rap, Ed Sheeran has written a song for you - yes, you!