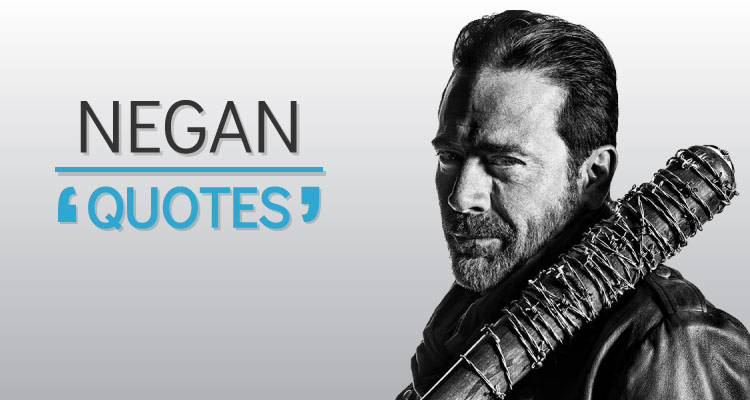 Excuse the shit out of my God damn French, but Negan is freakin‘ funny! His sick sense of humor has had us in fits of laughter and his cruel and cutting quotes have somehow turned him into a charismatic and comical villain – in fact, he’s been ranked as one of the greatest Walking Dead characters in our list! As awful as they are, Negan’s punch-lines, insults and “jokes” have undeniably brought some of the best laughs in the bleak world of The Walking Dead.

Think you can hold back the giggles? Here are 19 awful Negan quotes you can’t help but laugh at…

1. At least Negan likes women (a bit too much). It could be worse…

“I don’t enjoy killing women. Men? I can waste them all the livelong.”

2. Negan does not hold back with the metaphors!

“Your mouth is all puffed up like a baboon’s ass”

3. He’s not afraid to admit what turns him on…even if it’s bizarre.

“You see this? This is the kind of thing that just tickles my balls.”

4. At least we know what Negan’s favorite bedtime story was…

5. You’ve got to admit, Rick’s side-eye does get pretty annoying…

“I could never do this with Rick. He would just be standing there, scowling, giving me that annoying side-eye he gives me.”

6. Negan cracks the funniest jokes…at the most inappropriate times…

“You did have guts. I’ve never been so wrong in my whole life!”

7. He totally believes in karma but, who doesn’t?

“Lucille’s beautiful, smooth surface is never gonna look the same, so why should yours?!”

See Also: Check out this awesome replica of Lucille in our Walking Dead gifts post!

8. Negan’s idea of “freaky-deaky” is totally different from yours but who’s to say we can’t laugh?

“I’ve got my fingers crossed for a little freaky deaky.”

9. Negan took a swipe and a slam at Glenn! You definitely shouldn’t be laughing right now, but you are.

“I just popped your skull so hard your eyeball popped out, and that shit is gross.”

10. Negan’s right. Rick does look meaner with a man-bush.

“Is that you, Rick? Underneath all that man bush? Shit, I would not have messed with that guy.”

11. Possibly one of the best laugh out loud moments in The Walking Dead?

“Holy crap, you are creepy as shit sneaking up on me wearing that collar with that freaky ass smile.”

12. Negan is a pro at humiliating people…and telling them the truth…

“In case you haven’t caught on, I just slipped my dick down your throat and you thanked me for it.”

13. Yet another metaphor from Negan that makes you feel bad for laughing…

“Lucille is thirsty. She is a vampire bat!”

14. We’re totally using this quote in life! You shouldn’t laugh, but you do anyway.

15. It’s about time Negan realized that women can be badass too!

“You got some beach-ball-sized lady nuts coming in kamikaze like that.”

16. Negan is quite the poetic genius, I must say…

“You ever hear the one about the stupid little prick named Rick who thought he knew shit but didn’t know shit and got everyone he cared about killed?”

17. Negan’s threats are just as funny as they are scary…

“I hope you got your shittin’ pants on. Cause you, are about to shit your pants.”

18. He’s nobody without Lucille or his leather jacket…

“I wear a leather jacket, I have Lucille, and my nutsack is made of steel.”

Hot diggity dog, weren’t those quotes awful! Just like these Walking Dead jokes, Negan’s lines make you feel bad for laughing. He seems to have that effect on people. Admit it, the bat-wielding villain is officially your new guilty pleasure…

Who was Negan before the apocalypse? We’ve come up with 8 possible theories about his past that actually make sense…

10 Best Walking Dead Theories – How Will It All End?