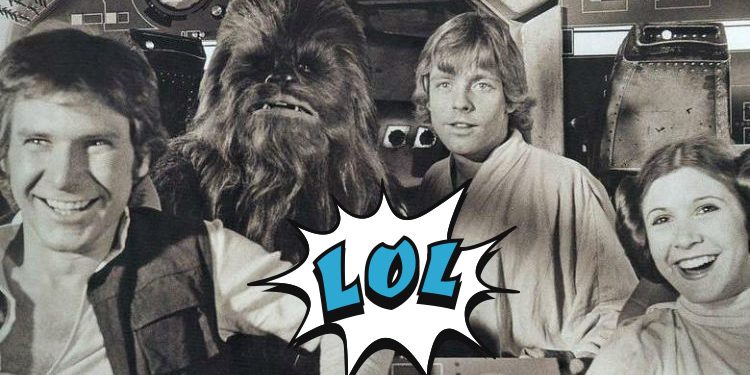 Can’t get enough of the galaxy far, far away? Already stuffed your brain with enough Star Wars trivia and hunted for all the hidden Easter Eggs in the saga? Perhaps it’s time for a laugh. It’s not all about lightsaber battles or sassy robots. Sometimes you have to let the force go and let the memes be with you instead. Why not listen to a Jedi’s joke for a change? Or get a load of Darth Vader’s sense of humor?

We’re about to introduce you to a whole different galaxy far, far away – one that’ll make you question Luke and Yoda’s bond and R2-D2’s language as well. Here’s a list of funny Star Wars memes…

1. If Darth Vader had a theme tune, it would probably go like this…

2. Who knew Yoda and Luke were so…close?

3. The life of a Stormtrooper…

5. Jabba the Hutt getting in with the times!

6. Now we know who Michael Jackson was singing to!

7. Damn Darth Vader doesn’t do too well after drinking, does he?

8. We enjoyed the innocence of young Anakin whilst we could…

9. Finn and Poe totally give us #BromanceGoals

10. OMG George Lucas must have put Yoda in charge of the Star Wars timeline!

12. When you open the front camera vs. the back camera…

13. Obi-Wan Kenobi could have at least WARNED Luke about lightsaber safety…

14. Yoda is all of us when the alarm rings in the morning…

17. Buns sure do run in the Skywalker family!

18. We told you Luke had a lot in common with Jaime Lannister!

Get your hands on some cool Star Wars stuff including a trivia game and your own BB-8 Droid!

19. If the ocean was filled with Jawas instead…

21. If Yoda was a member of The Beatles…

22. Because Chewie’s worth it…

23. When you get stoned and start using different linguistics…

26. For the dummies who need an explanation for Rogue One…

27. Stormtroopers will forever and always be useless…

29. Anyone else clock the similarities between Jyn and Katniss Everdeen?

31. When you want to sound like a Jedi to your haters…

34. A detailed description of Rogue One characters…

35. Turning one of the worst Star Wars movies into the funniest meme…

37. The Last Jedi may have disappointed many but we’re sure this Leia meme won’t!

Felt the force of these memes? Bet ya did! In fact, we bet you won’t look at your favorite Star Wars characters in the same way again!

Want more hilarious jokes from the internet? Have a scroll through our collection of Leonardo DiCaprio memes for the ultimate laugh!