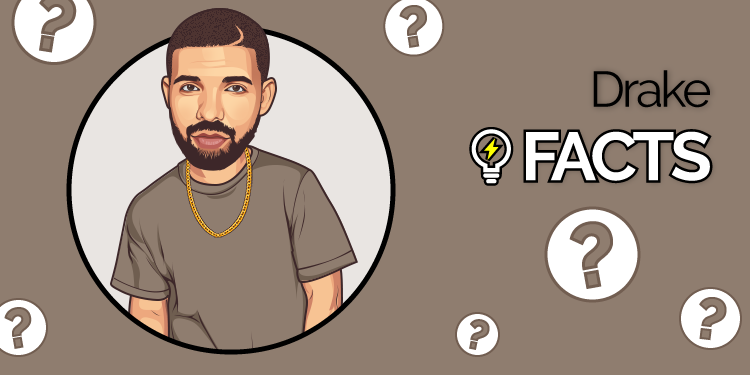 So you know the lyrics to Hotline Bling and Toosie Slide back to back and you follow his every move on Twitter and Instagram, but did you know that Drake once wrote a heartwarming letter to the late Aaliyah or that he grew up considerably “poor”?

If you truly consider yourself a die-hard Drizzy fan, then you’d already be well-informed of the 22 Drake facts we’ve listed below…

We’ll be surprised if you didn’t know this one. ‘Drake’ is actually the rapper’s stage name. Forget ‘Champagne Papi’ or ‘6 God’, his name in full is actually ‘Aubrey Drake Graham’. We’re guessing only his nearest and dearest call him by that name…

Wondering where Drake is from? The Controlla artist was born to his African American father, Dennis Graham from Memphis, Tennessee, and Jewish Canadian mother, Sandi Graham. That’s right, Drake is Jewish. It now makes sense why he released Views From the 6 on April 29th – to treat his fellow Jewish fans during Passover!

3. He Has Music in His Blood

He can sing, and he can sure as hell rap. Drake has bags of musical talent, but where did he get it all from? Well, his father, Dennis Graham was a drummer who worked with Jerry Lee Lewis while his uncle, Larry Graham, played bass for Prince. Drizzy has been raised loving and listening to music…

4. Drake Started Off as an Actor

If you thought music is where Drake began his fruitful career, you thought wrong. In fact, the artist kicked-off his fame by starring as the character, Jimmy Brooks on Degrassi: The Next Generation. He played the character from 2001 until 2009 and even earned a 2002 Young Artist Award for best ensemble in a TV series!

5. He Has Written Songs For Big Artists

This interesting piece of trivia proves Drake really is a man of many talents. Not only is he a rapper, singer and actor, Drizzy is also a song-writer, for other superstars too. He wrote Un-Thinkable for Alicia Keys and co-wrote Fall For Your Type for Jamie Foxx.

6. Drake Once Had a Crush on Nicki Minaj

Drake admitted back in 2010 that he had “a crush” on Nicki Minaj. He told MTV that his song Unthinkable was actually inspired by her: “I’ve always really, actually, really had a crush on her, always really loved her, and she’s always just looked at me as, like, her little brother,” Nicki may have friend-zoned Drake several times in the past, but at least he was lucky enough to make music with her.

Drake might rap about feelings and relationships and come across as a softie to some, but in actual fact, he’s no stranger to beef and brawls! Apparently, the OVO rapper landed Chris Brown in hospital with a gashed chin back in 2012 after a fight over Rihanna in a nightclub. The two are now amicable and have even released songs together. But Drake’s beef with other artists go on – the star has famously feueded with Meek Mill and Kanye West, too!

8. Drake Began His Career Through Mixtapes

Budding rappers, take note. After being inspired by the likes of Jay-Z and Clipse, Drake began his rap career through a series of self-released mixtapes when he was 20 years-old. He began releasing them in 2006 but it wasn’t until 2009 when he was officially signed to Universal Motown.

9. Drake Really Did Start From the Bottom

When Drizzy was young, his father was constantly in trouble with the law. His parents divorced when he was 5-years-old, leaving Drake to move out with his mother. Sandi Graham was unable to work due to rheumatoid arthritis and had to live off disability checks and depended on financial help from her brother. Drake and his mother moved several apartments before renting a room in a basement.

In an interview with Rolling Stone, Sandi admitted that they “were poor” – “I think Aubrey realized that he didn’t have an inheritance he could depend on, and that he was going to have to do it himself.” she told the magazine. Drake’s Started From the Bottom lyrics now make a whole lot of sense…

10. He Has a Tattoo of Aaliyah

Drake’s love and appreciation for Aaliyah runs deep. The rapper once revealed that the late songstress has had the biggest influence on his career. What has he done to commemorate her? Not only has Drake featured on her song Enough Said, but he’s also got a huge tattoo of her face inked on his back alongside his mother, grandmother and uncle.

Grab a tissue! On the ninth anniversary of her death (Aug. 25, 2001), Drake took to Rap Radar to write a letter to Aaliyah.

I’ve never lost a parent, a friend, or a lover but I will never forget this day for the rest of my life. I remember getting the news that you had passed and it connected with my heart like a clean shot from Muhammad Ali. I was crushed. Not only was I one of your biggest fans but I was truly in love with you. I loved the way you carried yourself, the way you dressed, the confidence with which you addressed passion and relationships in your music. I said to myself that even if we never met, I wanted a woman in my life just like you. I am pained that we will never get to connect now that music ended up being my career path. But you should know, we all listen to you everyday and we remain inspired and moved by all that you’ve given the world. I hope I make the right life choices so I can end up in heaven where I know you rest your head. I’ll continue to make music in your honor until the day we finally meet. Dinner’s on me!

Love you always and forever,

11. He’s a Victim of an Internet Joke

After Drake released the music video for Hotline Bling, his bizarre dance moves took the world by storm. Fans sparked a social media frenzy by creating a bunch of hilarious Drake memes online. Not just that. There’s a Twitter page that mocks Drake’s softer side called “Drake the type”.

12. He has Several Chart Records

Here’s a surprising fact! In 2017, Drake beat Adele’s record for most wins at the Billboard Awards in one night. The rapper earned himself a whopping 13 gongs from 22 nominations! In other words, he’s the only artist (as of now) to have won so many Billboard awards in a single night.

14. He Always Sets Himself Money Goals

Drake likes to shoot for the stars! When Drizzy first started his career, he aimed to make $25 million by the age of 25, and so he did. Once he made that big amount of money, he set a goal to make a whopping $250 million by the age of 29. Although, he didn’t quite meet his goal, the rapper is still rolling in fortune. In 2020, Drake’s net-worth was $150 million and was ranked No. 5 on Forbes‘ list of the richest rappers in 2019.

We all know that Drake likes to sing about past and failed relationships but none of us really know which exact ex-girlfriend his heartbreak hits are about. The 6 God rapper has been romantically linked to a selection of famous, beautiful women like Rihanna, Jennifer Lopez, Serena Williams, Zoe Kravitz and Karrueche Tran.

16. His Ex-Girlfriend Sued Him Over Marvin’s Room

Marvin’s Room might be your favorite chill-out tune but it definitely isn’t Drake’s! The song brought on a lot of stress for Drizzy. The girl whose voice is heard on the telephone is apparently Drake’s ex-girlfriend. She allegedly ended up suing Drake for using her voice without her permission and not getting paid promised royalties.

17. Drake is Signed to a UK Grime Label

Drake’s UK fandom were mega-hyped when the rapper collaborated with grime artist, Skepta on their song Ojuelegba, but they went even crazier when they found out he’d signed to Skepta’s label, Boy Better Know. Like he said on Instagram, Drake is officially “the first Canadian to be signed to BBK”.

There’s no shame in being a fan of the wizarding world, but we all know that it’s rare for a rapper to make this support public! Drake is such a huge fan of Harry Potter that he even has a tattoo of the popular character – and his owl – on his back. In an interview with Billboard, Drake admitted that he wanted the first-edition book of The Sorcerer’s Stone which was on the market for $16,000 – “I should get it. My birthday’s coming up. Maybe I’ll buy it for myself as a treat.” There’s a fun fact you didn’t see coming!

why does Drake have Harry Potter and Hedwig tattooed on his back? 😭😂 pic.twitter.com/ycZPDVZEUE

Drake has made it onto our list of the worst celebrity tattoos – not for his Harry Potter one, though – he has more crazy ink!

It came as a surprise when the world heard that Drake had a son. After several rumors and speculation, Drizzy confessed that he was indeed a father to baby Adonis on his album Scorpion in 2018. The mother of his child is French artist Sophie Brussaux, who is regularly seen on Drake’s Instagram, co-parenting.

20. Drake Has His Own Whiskey

If you ever want to drink like Drizzy, try sipping on one of his very own creations! In 2016, Drake developed his own whiskey brand, Virginia Black, which sold 30,000 cases globally in its first year! Cling, cling!

As an avid supporter of the UK music scene, it was a matter of time before he moved on to the British television scene, too. Drake was such a fan of the 2011 show Top Boy that he went on to revive the series in 2019. The rapper acted as executive producer on the Netflix show and its success across the world helped shed light on London life and culture.

Drake is loud and proud of his roots. With several music videos and song lyrics dedicated to his home town, Drake’s endless publicizing of Toronto ended up increasing the city’s tourism. In 2018, the Views artist was reportedly responsible for 5% ($440 million) of Toronto’s $8.8 billion total annual tourism income.

These facts about Drake’s life really are an eye-opener, who knew the rapper had actually started from the bottom? Or that he had surpassed a record only achieved by megastars like Adele? There really is a lot to learn about these popular celebs and their lives behind the spotlight.

So, how many of these facts did you actually know? Be honest and tell us in the comments below…

Want to show-off your love for Drizzy? Check out these awesome Drake gifts that you can treat yourself or one of your woes to…