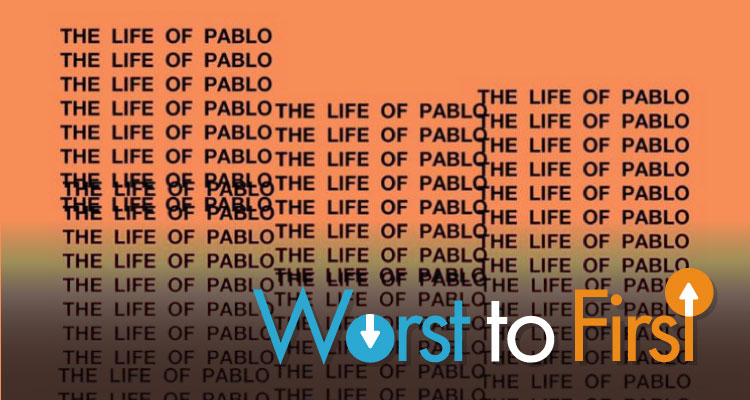 The Life of Pablo is certainly a masterpiece, ladies and gentlemen. Although it once again proves Kanye West to be a self-absorbed artist, it also shows him to be a talented one. Ye raps, writes and produces on this record that has revived and excited his old school fans. That’s right folks, the old Kanye is very present on this album. So which tracks stood out most and which ones flopped? Here’s a list of TLOP songs ranked from worst to first…

We’re not saying this is a bad track. The testimony in this song is certainly real and from the heart. It just ranks as the least best one compared to the other dope tracks on the album. Why? Well Kanye doesn’t even feature on Low Lights for starters. He may have written and produced this gospel-inflicted record and it’s inspirational to say the least but when you rank it against numbers like FML or Famous, it just doesn’t stand out.

“I love you like Kanye loves Kanye”. There isn’t a single fan who’s listened to this without smiling. Kanye raps (if that’s what you call it) about his favorite subject – Kanye, in this short, simple yet entertaining track. At least he acknowledges how egotistical he can be!

Despite the presence of “old school” Kanye on this album, many will be saying “I miss the old Kanye” when listening to Freestyle 4 . In fact, it would have made sense if Freestyle 4 was featured on Yeezus, Kanye’s worst-ever album, rather than on The Life of Pablo.

As much as it sucks to hear that Sia and Vic Mensa were removed from the album version of Wolves, we can’t complain because it’s Frank Ocean who’s replaced them. Although the song itself isn’t exactly our favourite, we’re glad to hear Frank finally come out of the woodworks.

So this is the track that apparently delayed TLOP’s release. Well, it’s safe to say, it’s nothing worth waiting for. It still has a place on our playlist thanks to Chris Brown’s great vocals but if only Kanye had a longer verse. Waves could have been so much better…

Kanye goes from calling himself “Steve Jobs” to a “ghetto Oprah” in the track that almost sounds like a sequel to On Sight. Feedback is a grower once you overlook the egotistical lyrics…

This is what we meant when we said Kanye has excited his old school fans in his latest album. The rapper redeems his College Dropout demeanour in 30 Hours – a raw hip-hop rhythm with boastful lyrics. If you think this is a decent track, wait until you hear the higher ranked hits on this album.

Does Facts make you want to throw all your Nikes out? Yeah, us too. Kanye slams, rips and tears Nike apart in this loud, self-obsessed and high-powered anthem. Make sure to turn up the volume when Kanye lets out that scream, we promise you’ll be laughing.

What a far cry from Yeezus! Ultralight Beam promises to take you to heaven and back with its stunning down-tempo beat, vocals and choir. Kanye gets personal, pensive and even pays a small Paris tribute in his lyrics. If this track doesn’t touch your soul, we don’t know what will.

Press play, kick back and relax with the chilliest track on The Life Of Pablo. If you’ve experienced the ups and downs of friendship, Real Friends will speak to your soul. Ty Dolla $ign’s vocals are not to go unnoticed. That guy is super talented.

Fade featuring Post Malone and once again, Ty Dolla $ign serves as the dance-floor rhythm of the album, bound to be played across nightclubs around the world. When that bass first drops, you can’t avoid bopping your head. We’re already addicted to that infectious beat…

Any track Kendrick Lamar features on is automatically classified a banger. No More Parties in L.A has an old school vibe and a classic Ye flow. It’s close to going down as one of the greatest hip-hop collaborations ever recorded. Nice work, boys!

Famous may have rubbed people the wrong way with its notorious Taylor Swift diss but who’s to say it isn’t a great song? In the midst of bragging about his fame, Rihanna lends her vocals in this catchy hip-hop number with Kanye. When that beat drops, prepare to be slayed.

Kanye gets personal in Father Stretch My Hands Part 1 and Part 2, bringing up his mother’s death, his father’s money struggles, and his own nearly fatal car crash. Hip-hop is perfectly combined with gospel and Kid Cudi’s voice gives you all the feels as the two-part tune plays out. Turn the volume up, the R&B groove and trap beat will take you away.

The second best offering on the album is none other than The Weeknd-assisted track, FML. The Weeknd delivers a memorable spot on the album with his stunning vocals. This dark song is so good, it could actually be a career defining track for Kanye. It’s one of the greatest 3 minutes and 56 seconds TLOP has to offer.

TLOP truly features a handful of great hits but if we had to recommend one track and one track only it would be Highlights featuring Young Thug. Young Thug’s influence is all over this one and we’re totally feeling it. The superb production, memorable lines and head-bopping beat helped class this hit as the strongest track on the record. In case y’all haven’t noticed yet, Kanye throws shade at Ray J and brings up Rob Kardashian and Blac Chyna’s relationship in his lyrics. You’ll be hitting the repeat button every time…

Kanye West wasn’t lying when he said his new album would be one of the greatest of all time. Well, one of Kanye’s greatest, that is. What do you think of The Life of Pablo? What’s your favorite track? Let us know in the comments below…

The album proves Kanye to be a self-absorbed artist however a talented one. Overall 4.2/5 stars.