It’s all going down again, ladies and gentlemen! Meek Mill is beefing with yet another of his fellow rappers. Nicki Minaj’s fiancé has waged war with 50 Cent on Instagram, just six months after his heated exchange with Drake last year.

You’d think he’d have learnt his lesson after being roasted on Twitter following the Meek vs Drake feud but no, Meek is well and truly firing shots at 50 Cent and the Candy Shop rapper is throwing shade right back with absolutely no chill . Here’s how the feud went down…

It looked like Meek got tired of slamming Drake in his music and so his attention turned to none other than 50 Cent. In his new track titled Gave Em Hope, Meek mocked 50 for filing bankruptcy last summer. He raps:

“I be deep in your hood where you never be at
Be with them guys that you never could dap
You could never adapt
You know the game, if you cosign a rat, you forever a rat
We were never with that
You tried to go “Money” May with that paper, but now you in debt cause you never was that”

Of course, 50 wasn’t too pleased with Meek’s latest lyrics and so he took to Instagram to have it out with him.

With a poop emoji edited with Meek’s face, 50 wrote “LMAO Hey s**t head, your career is over already.you better focus on getting Nikki pregnant so you can at least get child support girl. 💩💩💩 new meek emoji lol”

It didn’t take long for Meek Mill to respond. He soon shared a photo of himself holding loads of cash with a lengthy caption directed at 50…

And so 50 Cent wouldn’t stop. He began posting a slew of disparaging Meek Mill memes…

Meek had one last thing to say by posting an old photo of himself with 50 Cent captioned, “Say less…. Just watch these characters!”

50 Cent wouldn’t quit until he had his name trending on Twitter. He continued absolutely roasting Meek Mill with various memes… Canadian politician, Norm Kelly even got involved and started mocking Meek, too…

When your girl lets you take pics with her money. pic.twitter.com/I0NNUAMg0l Hours and hours later, 50 continued his attack on Meek. He even posted this obituary. Dang! 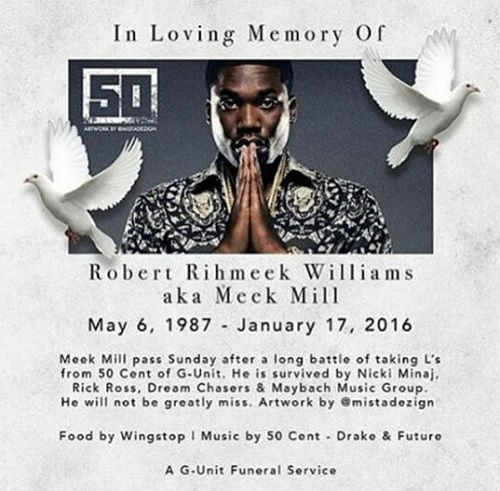 Meek Mill gone and done it again, folks. They don’t want you to win, Meek. It’s time you stopped slamming other rappers just to get us to listen to your music, bruh!

12 Drake Fights – His Most Shocking Beefs