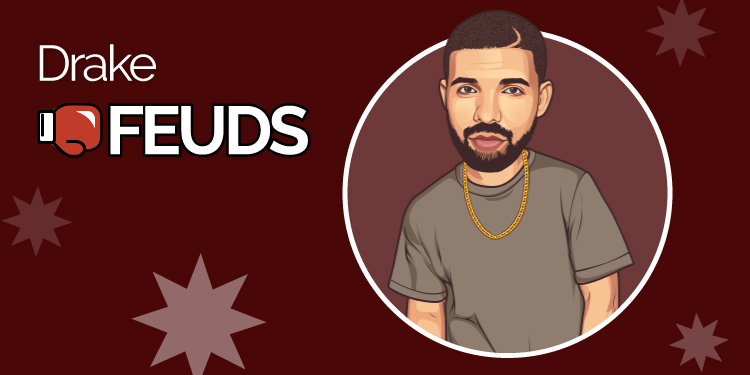 Drake is known for his quotable lyrics and impeccable style, but most of all for his famous diss tracks. While Drake may seem calm and collected, he refuses to let any other celeb stand is his way of success.

He may have started from the bottom, but now he’s at the top, he’s determined to shield his throne as rap legend. This was evident when Meek Mill claimed that Drizzy has a ghostwriter.

While the rapper has grown since then and is keen to take the moral high ground, we’ve revived the 12 most shocking fights and feuds that Drake has been involved in.

These famous rappers haven’t stopped feuding since 2015 when Meek accused Drake of “not writing his own raps” and using a ghostwriter for his verse on their collaboration, R.I.C.O.

The famous tweet resulted in two diss tracks by Drizzy, Charged Up and Back to Back in which he referenced his good friend Nicki Minaj (who was dating Meek):

“Is that a world tour or your girl’s tour? I know that you gotta be a thug for her. This ain’t what she meant when she told you to open up more.”

The spat continued with a back and forth of diss tracks for years. But the rap beef officially came to an end in 2019 when the pair collaborated on Going Bad. Drake even shared his love for Meek during a guest appearance on Meek’s tour, praising him for his amazing comeback.

There wasn’t always animosity between Drake and Kanye – the rappers actually started off as friends in 2009 and openly praised each other. But a few years later, things started to go pear-shaped between the stars.

Ye cut Drizzy’s bars out of his track, All of the Lights in 2010 and since then, Drake has taken many jabs at Ye, claiming that he used to look up to him, but now wants to surpass everything that he’s achieved.

With lyrics like, “Kiki, do you love me?”, there were conspiracy theories that Drake hooked up with Kim Kardashian (Ye’s wife) in retaliation. After their turmoil, the spiritual Ye tweeted Drake to apologize for his actions but it wasn’t long before the spat was ignited again. Kanye accused Drake of “threatening” him and hiring hit-men to attack Pusha-T.

Drake’s fight with Kanye hasn’t been resolved since then…

This rap beef started when Pusha T released Don’t F*ck with Me and Exodus 23:1 with some direct shots at Drake and his label Cash Money Records. Not being one to stay quiet, Drake answered back during one of his Washington D.C. concerts in 2012.

From then on, the pair released diss track after diss track including Pusha’s Your Favorite Rapper, H.G.T.V. and Drake’s Tuscan Leather and Two Birds, One Stone.

With more sly digs on social media since then, we’re pretty sure there’s more to come from this on-going rap battle.

Being romantically linked to Chris Brown’s ex, Rihanna already sets a divide between these two celebs. But the tension got really heated when these boys were spotted in the same New York club.

It was rumored that Drake sent a bottle over to Chris with a note saying: “I’m f**king the love of your life, deal with it!” Naturally, the note didn’t go down too well and ended in a brawl. Chris even revealed his scratched face in a photo from being punched and hit by a bottle.

While Drake didn’t fire back in a diss track this time, Chris Brown did with the line: “Them eyebrows? Man, them sh*ts is yikes / OVO, you overdose, screamin’ Y.O.L.O. though, I live twice!” on the I Don’t Like (Remix).

Drake fired back in several interviews saying he “makes better music than Chris [him]”and that he didn’t want his “name to be synonymous with that guy’s name.“

Following their fist fight, the pair seemed to have made-up until Drake secretly dated Chris’ other ex, Karrueche. But all is good in the hood again, since the release of Drake’s Scorpion album; the famous rappers have shown nothing but love towards each other and collaborated on tracks including No Guidance.

After a few subliminal shots, Common confirmed that his Sweet diss track was directed at Drake. The lyrics seemed to take a hit at Drizzy’s soft side: “Singing all around me man, la la la. You ain’t motherf*cking Frank Sinatra”.

Drake then fired back with his track, Stay Schemin with the lyrics: “it’s feeling like rap changed, it was a time it was rugged/Back when if a ni–a reached it was for the weapon, nowadays ni–as reach just to sell their record.”

Common then fired back with a Stay Schemin (Remix) calling Drake out by name and calling him “Canada dry”. Turns out, as revealed in an MTV interview, this beef was over Drake’s relationship with Serena Williams, who is also Common’s ex.

Tyga felt the wrath of Drizzy’s raps when he decided to call Drake “fake” and admit that he “didn’t like him [Drake] as a person” during an interview with Vibe magazine in 2014.

Drizzy, as usual, stayed quiet until he released his track, 6PM in New York where he spoke to Tyga through his cutting bars by saying: “I heard a little little homie talking reckless in Vibe. That’s quite a platform you chose, you should’ve kept it inside. Oh, you tried. It’s so childish, calling my name on the world stage. You need to act your age and not your girl’s age” – clearly taking a swipe at Tyga’s (then) girlfriend, Kylie Jenner, who was his senior.

Their conflict escalated when Drake later took to Instagram to “like” Blac Chyna’s photos, who is Tyga’s ex. Tyga then referred to Drizzy in his diss-track, Make It Work.

As Tory Lanez rose to fame, he took a number of shots at his fellow Canadian rapper including in his mixtape, The New Toronto. But in true Drake style, he stayed quiet and let all his emotions out on his tracks.

The first insult directed at Tory was on Summer Sixteen where he said: “All you boys in the new Toronto want to be me a little”.

With shots fired back and forth through diss tracks and concert appearances, Tory added fuel to the fire by saying that he was in competition with Drizzy and aiming for “first place”.

When Tory remixed Controlla, Drake called him out by shouting: “All you boys doing fake controllas wanna be me a little” during his Summer Sixteen tour.

After their history of beefs however, the Canadian rappers dropped their battle in 2017 with Drake posting a snap to Instagram of the two standing next to each other.

These two rappers both dominate the hip-hop scene, and while they seemed to be fans of each other for a while, it all came crashing down when Kendrick dissed Drake on his track, Control, and called him a“sensitive rapper back in his pajama clothes” at the 2013 BET Cypher.

Drake fought back with a number of diss tracks including The Language, where he rapped: “F–k any ni–a that’s talking sh-t just to get a reaction / f–k going platinum, I looked at my wrist and it’s already platinum.”

But Kendrick took it a step further when he accused Drake of using a ghostwriter, too.

While there haven’t been any shots fired for a while, it’s clear that there’s still a massive divide in the music scene, with fans siding with either Kendrick or Drake. And it’s just a matter of time before beef flares up between the pair, again!

Drake started the feud with Luda back in 2010 when he said that he hates rappers who copy his ‘Supa Dupa’ rap flow and he wished people would leave it for those who can actually use it (referencing Ludacris).

Luda retaliated in a diss track titled Bada Boom in which he said: “Counterfeit rappers say I’m stealing they flows, but I can’t steal what you never made up, b*tch. Y’all some duplicate rap cloning n*ggas.”

With a few digs back and forth, Drake decided to apologize to Luda and squash their beef. He showed him some major love during his Billboard Music Awards acceptance speech in 2017 by saying he has a lot of love for him and has always been a fan: “Ludacris, we haven’t always seen eye to eye, but I’ve always been a big fan of yours and I got a lot of love for you,” he said. “I want to let you know that face to face, while I’m still here.”

These rap legends definitely fall on the frenemies spectrum. While it seemed like they were initially friends after collaborating on Off That, Drake started a feud when he went after Jay in his track I’m On One. Referencing Jay and Kanye’s album, Watch the Throne, Drake rapped: “I’m just feeling like the throne is for the taking. Watch me take it!”

Not one to stay silent, Jay fired back with the following lyrics on the We Made it (Remix): “Sorry Mrs Drizzy for so much art talk. Silly me rappin bout sh*t that I really bought. While these rappers rap about guns they ain’t shot…and a bunch of other silly sh*t that they ain’t got!”

Drake shot back on Summer Sixteen with: “I used to want to be in Roc A Fella, then I turned into Jay”. But in 2018, the storm calmed and the pair collaborated on Talk Up.

Drake paved the way for success for The Weeknd; he promoted his mixtape and gave him many guest appearances on his album, Take Care. Yet, despite his generosity, The Weeknd told Rolling Stone that he feels like he gave up “half of his album” for Drake.

Feeling betrayed, Drake released a verse about The Weeknd on his track, 5am in Toronto and said: “Cause I show love, never get the same outta n—as/ It’s funny how money can make change outta n—as”.

The Weeknd apparently bit back in Sidewalks, but since then, the OVO duo have been amicable.

Drake’s beef with Diddy came rather unexpected. But apparently, the pair got into an altercation in 2014 at a Miami club which resulted in Drake having a broken shoulder. It was reported that Diddy punched Drake a few times and accused him of stealing his track, 0 to 100.

Drake fired back two years later with the release of his track, 4pm in Calabasas rapping: “Certain s**t just too wild to reconcile/Take that, take that, no love in they heart so they fake that/DiCaprio level the way they play that/Damn nigga, what is that?”

Diddy didn’t respond and the pair seemed to have buried the hatchet as Puff showed up to Drake’s Summer Sixteen concert in 2016.

It’s safe to say that Drake is a silent fighter. He waits for the right moment to fire back with some deadly lyrics. We definitely wouldn’t want to get on his bad side!

Which of Drake’s feuds would you like to see resolved? Let us know by joining in on the conversation below!

Want more fights and beefs from the entertainment world? Check out the biggest celebrity feuds of all time!