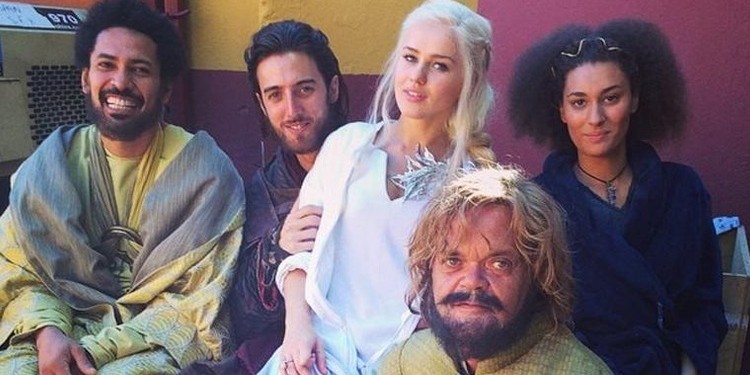 Sorry to burst your bubble, GoT geeks – no, that isn’t Kit Harington slaying a White Walker, nor is that Lena Hedley walking the Walk of Shame.

As general movie and television shenanigans go, Game of Thrones hires body doubles to fill in for demanding stunts and challenging scenes. Think twice before you praise a star for baring it all or for their skills in gymnastics. Most of what you see features the actors’ on-screen twins, filling in for demanding scenes.

Don’t believe everything you see! Here are a few Game of Thrones body doubles that look so similar to their famous counterparts from Westeros, they’ll make you look twice…

When she’s wearing those iconic platinum yellow locks, it’s easy to do a double take when looking at Daenerys’ body double! Rosie Mac transformed into the Mother of Dragons to help shoot amazing GoT scenes like those in the fighting pits of Meereen.

The stunner only stood in for Emilia Clarke for six weeks in 2015. After that, Emilia decided to take drastic scenes into her own hands. Believe it or not, she didn’t use a body double for that scene in season six when she burned her Dothraki captors! She told Entertainment Weekly, “This is all me, all proud, all strong. I’m just feeling genuinely happy I said ‘Yes.’ There ain’t no body double!” We look forward to more of Dany’s powerful scenes…

An actress who did use a body double for undressed scenes however, was Lena Hedley – AKA Cersei Lannister. Remember that grueling Walk of Shame she was forced to undergo at the end of season five? Guess what? That was all on-screen magic!

Lena’s head was CGI’d onto a body double’s body because she wasn’t “brave enough” to show-off her birthday suit. Other reports claim she was also pregnant.

Instead, British-American actress, model and singer Rebecca Van Cleave was body-confident enough to strip off in the streets of King’s Landing. “It was one of the scariest, most wonderful, most gratifying experiences I could have imagined,” Rebecca said. “I never in a million years would have thought I would be in Dubrovnik surrounded by hundreds of extras and crew members throwing food at me, but it was amazing.”

Looking to fill up your wardrobe with apparel from the show? Check out these Game of Thrones tees!

Daario Naharis has a doppelganger double! Ignacio Jimenez Blanco stands in for Michiel Huisman when his actual physical presence is either at risk or just not required.

What’s it like working on the Game of Thrones set? The actor told Buzzfeed, “It’s a lot of fun, but kind of stressful sometimes. You get up around 5 a.m. Then a van picks you up and takes you to the set where people are waiting to put your makeup and dress on. Seems easy but only this takes like an hour or more! Then it’s time to get ready to get to work…Everything is so well done (the set, the costumes…) that you actually believe you are there. It’s just amazing.”

The Hound and Brienne – Unknown and Mark Slaughter

It gets tiring fighting a dirty, bloody battle! When the actors of Game of Thrones are worn-out from filming difficult scenes, their body doubles step in. That’s what happened during the Hound and Brienne’s infamous battle in season four!

The Hound’s stunt double is a deadringer for Sandor Clegane, while, funnily enough, Brienne’s is a man named Mark Slaughter! The stunt performers spent “9 days in Iceland fighting and rolling down cliffs” said Mark, who also stood in for actors in The Legend Of Tarzan, Outlander, Jack The Giant Slayer and In The Heart Of The Sea.

These doubles are living the dream! Just imagine playing Tyrion Lannister’s stand-in! It’s pretty surreal looking at this photo of the show’s alternates. The behind the scenes snap features Tyrion, Missandei and Hizdahr’s look-alikes next to Rosie Mac and Ignacio Jimenez Blanco. No, you’re not seeing double, that is Tyrion’s same-size stuntman! They look so similar, right?!

I’m going to have to break it to you – that isn’t Kit Harington performing all those impressive stunts in Game of Thrones. Most of Jon Snow’s action sequences are performed by Marc Redmond, the actor’s stuntman! The actor who has also filled in for stars on shows like Vikings, Penny Dreadful and Ripper Street has his own fitness and martial arts training centre. He has worked on the show for two years and has been sworn to secrecy over the storylines.

Training to fight those White Walkers “is a physically demanding job”, Marc told The Independent. “Sometimes we have to rehearse for days and weeks and carefully go through the choreography for fights and stunts.” Don’t worry, Kit – you’re still our number one Jon Snow!

Standing in for Sophie Turner is yet another redhead, Megan Parkinson. The actress from Yorkshire appeared on popular British medical drama series Holby City as well as two movies, Our Loved Boy and To Walk Invisible. Is it just me or does this actress look a lot like his girlfriend and co-star, Rose Leslie? Who knows, maybe Megan Parkinson also stood in for the beloved Ygriette, too!

Turns out, the double body star ended up getting a role on the show! The actress landed the part of Alys Karstark in later seasons!

The show really does fool you with its stunt doubles. Here’s Arya Stark’s double who goes by the name of Kristina Baskett. Turns out, she’s a professional gymnast. No wonder she’s able to pull off those epic fight battles. Believe it or not, she actually took that punch from Brienne of Tarth back in season seven!

It makes you wonder who you’re really seeing during the show doesn’t it? Next time you watch Game of Thrones, keep an eye out for the show’s body doubles. Even cooler, check out what the cast of the show look like in real life!