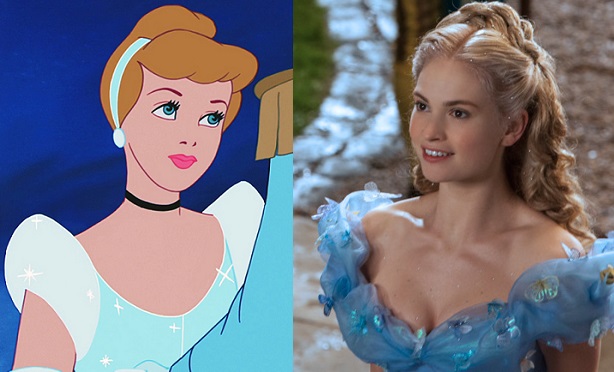 65 years ago Walt Disney brought us the magic that is Cinderella. We’ve now been given a newer version of everyone’s favourite fairy tale. It’s full of fantasy, romance and beautiful visuals. But is the 2015 version similar to its predecessor? Disney’s new live-action, Cinderella has a totally different feel compared to the 1950s animated version. If you’re planning on going to see the new one, be prepared for these big differences in the movie’s story, characters, and overall style.

Classic characters go from animations to real people with personalities in the latest movie. In the past we’ve only known Cinderella as a servant girl and a princess. In the new Cinderella, we actually get to see the happier times of her life, as a child with a loving mother and father. We even learn more about the stepmother’s history as a widow, who married for love and then lost everything.

Cinderella’s love-story is given a lot more depth as compared to the animation. In the 2015 movie, she meets the Prince before the ball, giving her much more justification for wanting to go in the first place. Also, it helps suspend disbelief and make viewers feel more comfortable with Cinderella getting married after she just met him. The Prince gets much more screen time, and more personality as a result. He even gets a name- Kit.

As much as we get to see Cinderella happy in the new movie, we see her during her sad times even more. There are two on-screen deaths in the new Cinderella, both of parents who have taken ill and died with their child beside them. Two other tragic family deaths happen off-screen- Cinderella’s father, and the stepmother’s first husband. In the original Cinderella, she only cries after her stepmother and stepsisters tear up her dress and stop her from going to the ball, making the drama of the moment much more intense. In the new Cinderella, she cries several times, giving the movie a more poignant tone, overall. The younger audience may not enjoy the new Cinderella as much as the animated version, simply because of the great deal of drama and emotion.

The first Cinderella is all about never giving up on your dreams. Cinderella even says it herself, “They can’t order me to stop dreaming.” This is a very inspirational message for children who want to grow up and be something as amazing as a princess. The new Cinderella movie’s theme can also be captured in a quote from the movie, “Have courage and be kind.” Unfortunately, the message came off very heavy-handed in dialogue. Cinderella and other characters say it at least five times throughout the movie, but don’t clearly demonstrate it in their actions.

One film being animated and the other being live-action changes the story as much as it changes the form. The original Cinderella spent a lot of screen time on anthropomorphized animal characters. While Cinderella’s friends, the mice, and the stepmother’s evil cat, Lucifer, still exist in the new movie, they have much, much less screen time, allowing the story to move beyond focusing on the Tom and Jerry-like antics of the animal characters.

This might seem as obvious as saying that one movie is animated and one isn’t, but the fact that the new Cinderella isn’t a musical takes away a lot of what made the first one so memorable. A Dream is a Wish Your Heart Makes and Bibbity Bobbity Boo both made it into the end credits of the new Cinderella because, let’s face it, the movie would otherwise have been incomplete.

So, is ‘Cinderella’ 2015 anything like the 1950s animated version? The live-action film beautifully brought cartoon-Cinderella to life. It was nothing short of enchanting, visually stunning and truly magical. Nevertheless, there’s nothing better than a classic, animated Disney movie with a touch of innocence and set of musical numbers. While major differences stood out such as detailed plot, more romance, less music and lack of animation, both movies did however have a few things in common- a shoe, a prince and a happily ever after. What more could you want from Cinderella’s fairy-tale?

Which version of Cinderella did you prefer? Let us know in the comment box below…

'Cinderella' Rating (out of 5)
4 Truly Magical

What's good about it: "Enchanting, visually stunning and truly magical"
Similar to: 'Maleficent', 'Into the Woods', 'Alice in Wonderland'